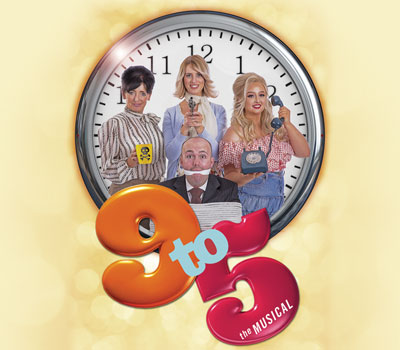 Be warned that going to see The Ellesmere Port Musical Theatre Company production at The New Brighton Floral Pavilion this week might seriously harm your health, in a very good way. Why? Because you’ll laugh until your sides ache, tap your feet and clap your hands until they throb and pinch yourself rotten at the fact you’re watching a company of amateurs and not fully fledged professionals at work.

From the moment the lights go down – at an almost unprecedented bang-on-time 7:30, it should be said – the audience are treated to 2 hours of non-stop fun, based on the 1979 hit comedy starring Jane Fonda, Lily Tomlin and Dolly Parton who, on screen, makes her own appearance amongst the fray.

The tale is one of a group of female office secretaries taking revenge against their bigoted, sexist, hypocrite, lying cheating boss by holding him captive in his own home for a month while his wife is cruising the world on his own money.

The boss in the film, Franklin Hart, is played by the legendary Dabney Coleman. Here Hart is played Gareth Earl and in all seriousness the latter brings just as much slimy loathsomeness to the part as the former. Earl’s timing, mannerisms and overall energy is breathtaking throughout, so that his character becomes more than just a two dimensional pantomime baddie but someone we can all relate to.

Even the baddest of bosses has someone who admires them. Mr Burns has Smithers in The Simpsons and Hart has Roz in 9-5. Here the role taken by Elizabeth Wilson in the movie is absolutely and totally nailed by Hayley Dale, who proves that she can not only sing with a fantastically raunchy Heart to Hart which is an absolute showstopper in its own right but with such delivery and comedic presence shows she can act brilliantly too.

But it is the parts played by the three protagonists that genuinely  inspire disbelief in that they do what they do for fun and not as a profession. As continuously passed over for promotion Violet, Liz Legerton is an absolute marvel, especially when she is given free reign to lose some of the control her company position demands. When stressed or angry, Legerton really lets rip and we heartily enjoy her doing so.

As temporarily love-lorn Judy Sara Haynes Shines Like the Sun.  Not unlike the song of that name she and her colleagues thunderously knock clear out of the Floral Pavilion and into the sea somewhere off the coast of Hilbre, so too does Haynes with a performance that grows alongside that of her character’s confidence.

But if its power, distance and range you’re after then look no further than Ciera Evans who as Doralee – the part made famous by Parton – is an absolute diamond I will be urging those responsible for casting professional roles to consider. Backwoods Barbie is a song that just oozes confidence and her singing is simply remarkable, filling the auditorium with room to spare. For one so young, her control and out-and-out stage presence is mesmerising, but it is her overall warmth in this role that glitters.

The music performed live by a faultless band is as uplifting as it is beautifully delivered. The choreography by all sizzles with sexy, sassy bravado. The costumes shimmer and shine but mostly do that which they are supposed to and transport us back to 1979. As for the set – and its seamless manoeuvring around by hands barely seen – well, it very nearly deserves a standing ovation of its own. Even the show programme the company have produced is of a more professional quality than most! Every detail has been maximised and it shows from first moment to last.

The Ellesmere Port Musical Theatre Company’s production of 9-5, then, is guilty of nothing more than delivering one of the best nights out you are likely to enjoy in any theatre, anywhere in 2017. In fact it wouldn’t be an exaggeration to say that, pound-for-pound, this is up there with the very best of productions to have been staged this year and I wholeheartedly urge you to go and see it while you can!