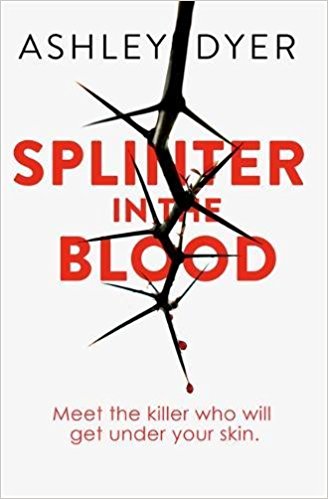 Splinter in the Blood

Set in Liverpool, Splinter in the Blood, the ‘debut’ novel from Ashley Dyer – the pseudonym for author of The Dispossessed Margaret Murphy, here aided and abetted by forensics expert Helen Pepper – is everything you could wish for in a crime novel. A tight, deliciously woven plot, multi-faceted and unpredictable characters, beautifully constructed descriptive prose and a tension that builds throughout that is as superb as it is disturbing.

Sergeant Ruth Lake and DCI Greg Carver are on the hunt for a serial killer who carefully poses his victims and covers every inch of their bodies in intricate, cryptic tattoos. Dubbed the ‘Thorn Killer’, by the media, the killer uses a primitive and excruciatingly painful thorn method to etch his victims. After many months, a breakthrough feels imminent. Then the killer gets personal: the latest victim – a student found only a week earlier – is staged to look like Carver’s wife.

Pushed over the edge, Carver spirals into a self-destructive cycle of booze and risky sex. Now he lies near death, and the unreadable Lake stands over him with a gun. Did she shoot her boss and, if not, why is she removing evidence from his apartment?

Carver and Lake are an interesting combination. A grizzled and fond-of-a-drink-or-six DCI and his loyal DS might smack of something akin to Morse and Lewis – and a few others – but nothing could be further from the truth.

Lake has a refreshing honesty about her that borders on naiveté which, in and of itself, gives her a credibility that many others tend to lack. Added to this are her determination and drive which give the character depth and helps the reader empathise, sympathise and – on occasion – chastise accordingly.

Carver, on the other hand, is hewn from crumbling limestone rather than solid granite and it is this vulnerability (an unsurprising aspect for him to have, given he’s been recently shot) that marks his narrative and creation as being one to watch.

There are a whole of host of credible peripheral characters to enjoy, too, not least of which being DC Tom Ivey and, oddly, Peggy Connelly who is without question the most likeable, non-stereotypical-yet-typical Scouse woman of a particular vintage ever created. Superbly well drawn also are the students who fall under suspicion – no doubt honed from Murphy’s experience working within the environs of HE for so many years – and the practices and deceptions of psychics and mediums.

If there is a problem it lies in the emphasis placed on Carver’s trauma-induced ability to ‘see’ emotional auras surrounding those with whom he engages, which sometimes drags in his interactions, particularly with Lake, which is a shame. This said, however, Splinter in the Blood remains a fine,  captivating novel that will more than satisfy the most critical of readers and doubtlessly encourage a surge towards Margaret Murphy’s equally impressive back catalogue.

There will be a launch event For Ashley Dyer and “Splinter in the Blood” at Waterstones in Liverpool One on Friday 2nd March at 18:30. For details Click HERE!