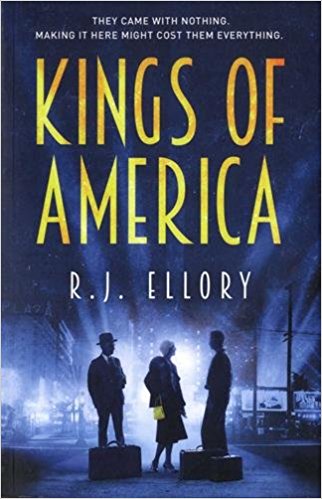 When Irish born fighter Danny McCabe commits a terrible crime, he flees to America and throws his lot with Nicky and Lucia Mariani, siblings from Corsica in search of their fortunes. After Nicky’s infatuation with the New York underworld sees them fall into trouble, the trio head west to the glitz and glamour of Hollywood where Lucia dreams of becoming a star.

Bound by blood and shared secrets, they carve out a life in 1930s Tinsletown. While Danny and Lucia embark upon an affair as profound as it is dangerous, Nicky is pulled ever deeper into the dark heart of Los Angeles. Nicky’s reckless ambition sees him make a name for himself amongst a bad crowd, while Danny desperately tries to bury the secrets of his past and carve out a good life for himself on America’s west coast. Lucia, passionate and loyal, is left in an impossible position, caught in the crossfire between her brother and the man she loves.

Ellory’s 1930s America comes to life in this vibrant portrayal of gangster Hollywood. His characters come alive as he paints the gruesome picture of gangster life. Nicky and Lucia’s love affair is beautifully played out against the backdrop of early Hollywood and their journey from when they first meet until the dramatic end to their own Hollywood dreams. Ellory gets the balance right between the reckless Nicky and his own love to protect Lucia to the young couple themselves, embarking a life of their own in the volatile world of show biz.

R J Ellory has created an atmospheric story of a time when film stars and gangsters crossed paths, his characters are rich and vibrant and are perfectly placed in the backdrop of the Hollywood hills.