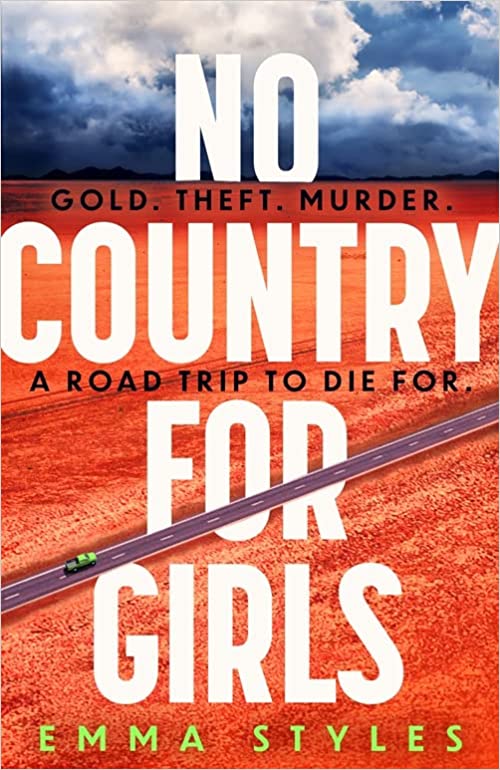 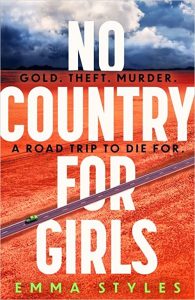 No Country For Girls

When a debut thriller is described in the blurb as being ‘Thelma & Louise for a new generation’, the bar is set pretty high. Does Australian author Emma Styles manage to clear it? Oh yes. And some. No Country For Girls is all this and more.

Gold. Theft. Murder. A road trip to die for.

‘It’s not exactly how I imagined the week starting. An accessory to murder. On the run in the victim’s vehicle.’

Charlie and Nao are strangers from different sides of the tracks. They should never have met, but one devastating incident binds them together forever. A man is dead and now they are unwilling accomplices in his murder there’s only one thing to do: hit the road in the victim’s twin cab ute, with a bag of stolen gold stashed under the passenger seat.

Suddenly outlaws, Nao and Charlie must make their way across Australia’s remote outback using only their wits to survive. They’ll do whatever it takes to evade capture and escape with their lives.

Rarely is it – and with huge kudos to the author – that a reader can get sucked into a story so quickly as they are with No Country For Girls. From the very outset, Charlie and Nao pose questions that simply need answering. The uppermost being ‘who the hell are these two and what the hell are they doing together?’

The phrase ‘opposites attract’ might have been designed for this pair. Two deliciously drawn characters – with flaws, saving graces, and desperation woven through their individual DNA – compel a flurry of page turning.

The premise isn’t new. Far from it. The bad guys must be outrun, the problems for the protagonists solved by blind luck or the occasional blur of insight. Not here though. Aside from the delightfully nasty Warren, the landscape becomes a monster of its own creation, with the wild palate of the Australian outback being brought to vivid life thanks to the skills of Styles’ delicate, wide-ranging descriptive prose.

Then there is the switch in POV. Two strings of involvement are hard enough for an author to keep a tight rein on. Three, however? Well, that’s genius, and the fact we not only see events unfurl from Charlie and Nao’s viewpoints but also that of Charlie’s kidnapped sister, Geena, really increases the involvement for us voyeurs. As does the use of Charlie’s antipodean accent. Never has the word ‘alright’ sounded more loaded than it does in her WA drawl.

A high-powered, no-holds-barred-thrill-fest that leaves readers breathless, No Country For Girls will leave nobody disappointed and is an instant nominee for Thriller of the Year.

No Country For Girls by Emma Styles is available to purchase by clicking the image below.