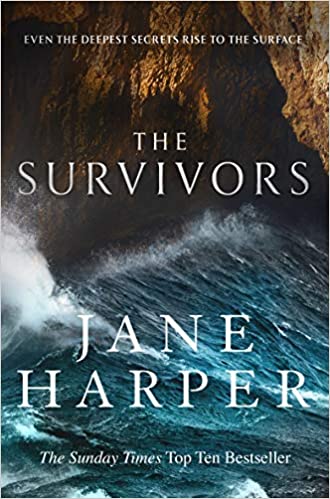 It is difficult to encapsulate the excitement of receiving a copy of Australian author Jane Harper’s fourth novel, The Survivors. With the critically acclaimed debut The Dry – a feature film of which, starring Eric Bana as Aaron Falk, has been recently released –  the beautifully crafted Force of Nature and the deliciously diverse The Lost Man already setting Harper’s stock high, expectations are naturally high.

Kieran Elliott’s life changed forever on a single day when a reckless mistake led to devastating consequences. The guilt that haunts him still resurfaces during a visit with his young family to the small coastal town he once called home.

Kieran’s parents are struggling in a community that is bound, for better or worse, to the sea that is both a lifeline and a threat. Between them, all is his absent brother Finn. When a body is discovered on the beach, long-held secrets threaten to emerge in the murder investigation that follows. A sunken wreck, a missing girl, and questions that have never washed away.

As with her previous novels, it is Jane Harper’s ability to bring to life in words and phrases such as completely rounded-yet-flawed characters to drive her plots. The interaction between the protagonists and subtly placed antagonists is a definitive lesson in ‘How To’ when it comes to writing compelling narratives. The underlying Aussie twang, too, becomes an added bonus that at once endears and encourages the reader to be the character’s ‘mate’.

It also Harper’s skill in recreating landscape, seascape and small-town paranoia which enthralls. On the face of it, Evelyn Bay, Tasmania, is a sleepy little backwater on the coast. Nothing ever happens and it is that sense of timelessness and isolation that makes the unfolding events all the more shocking and magnetic.

As for the crime itself, there isn’t any grandeur. There aren’t any gory details, or massive declarations of brutality to feast upon. The discovery of the victim is more than enough to shock and, in Harper’s skilled hands, the discovery is guaranteed to set emotions swinging high and low.

In short, The Survivors is as breath-taking a read as anybody dare wish for. Furthermore, this is a novel that is sure to ride as high in its esteem as its author’s stock for being one of the truly great crime novelists around today.