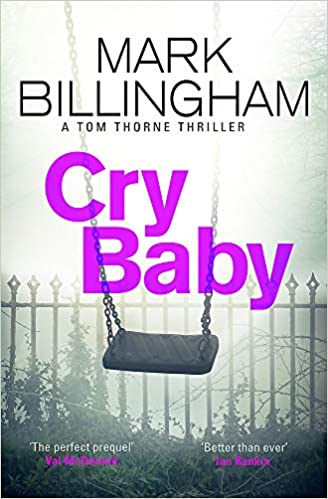 Can you remember what you were doing in 2000? Perhaps you were starting a new job? Getting married? Having your first child? Wondering what all the fuss surrounding Y2K had actually been all about?

Maybe you were, like Mark Billingham, agonising over the publication of your debut crime  novel?

Yes, unbelievably it is twenty years since Billlingham thrust the enigmatic Tom Thorne onto the then unsuspecting crime fiction world, barely believing that, two decades later, the ‘man’ for whom life has never been easy would carve, in the years ahead, a niche as indelible as Poirot, Wallander, Morse or Columbo.

Yet here Thorne is and here Thorne remains, as indisputably superb as ever, though on this occasion in a deliciously presented prequel to that self-same debut Sleepyhead, which has since gone on to sell 700,0000 copies+ across the globe.

In the summer of 1996, two boys run from a playground into the adjoining woods, but only one comes out. DS Tom Thorne takes on a case that quickly spirals out of control when two people connected with the missing boy are murdered. As London prepares to host the European Soccer Championships, Thorne fights to keep on top of a baffling investigation while also dealing with the ugly fallout of his broken marriage.

Cry Baby is, to put it simply, a classic in the making. A rip-roaring, page-fluttering tale of direction and misdirection that will leave readers flabbergasted at how deftly created the protagonist is, and how skilfully the plot is drawn in order to ensnare even the most experienced Whodunniter.

It is the sense of place Billingham builds page-on-page, whilst also taking time to provide a sense of space which allows his characters to breathe that is most satisfying. It would be easy for Thorne to become a a tableau of other fictional detectives. However, not least to Billingham providing him with a quick wit and a severe sense of self-deprecation that is ultimately winning and so steers Thorne away from caricature oblivion.

Instead, finding Thorne as a mere DS back-in-the-day, is like encountering an old school friend and being highly delighted you get on with him just as well as you always did.

Slick,poised, delightful and devastatingly devious, Cry Baby is set to become another instant Number One Best Seller and is the perfect starting point, should you not have begun your Thorne odyssey yet, to begin.

Although what has taken so long would, in itself, be a mystery even beyond Thorne’s capabilities.