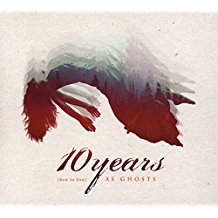 (how to live) As Ghosts

Just when you might have heard the last of a band, up they come with an absolute stormer!! 10 Years are back with their first album since 2015s From Birth to Burial, and, Lordy Lord, what an album they’ve provided with (how to live) As Ghosts.

Jesse Hasek’s vocals are as fresh as the morning dew, with his opening salvo on The Messenger hammering home the power and grandiose dexterity the band are renowned for. Added to this is the exhilaration that exudes from Brian Vodinh on guitar and drums and Matt Wantland’s guitar work.

Novacaine has the singularly opposite effect of its namesake. A cleverly composed, deliciously delivered song telling of the monotony of life’s journey at times, the first single from the album deserves massive acclaim. A towering powerhouse of a number, this sees Foo Fighters and Alice in Chains producer Nick Raskulinecz really come into his own.

How success can – and so often does – corrupt is the message behind Burnout. The thumping bass lines really drive the track, but again it Hasek’s voice that really impresses. Catacombs and Ghosts are quite remarkable in their acuity and grace, whereas Blood Red Sky takes things down a notch or two and into a delicately fashioned reminiscence.

The thing that lingers most is how many of these songs are absolutely tailor made for the live arena, yet never once does the production pudding become over-egged. This is a package that in no way can be described as being rough, raw or ragged. Yet neither can it be said that its polish out glares the craft within.

Phantoms gets things back up onto the rockingest of upbeats. A sort of melding of Rush with Muse, this tune haemorrhages and oozes and seeps with vivacity so that its sum total leaves you quite breathless.

Okay, within the eleven tracks there are a couple of tunes that don’t quite match up to that with which they are surrounded. Vampires, frankly, succeeds only in its job in filling some space, but only just, whereas Halos is the polar opposite. A tight, deftly packaged number that lifts the soul, Halos runs Novacaine close as the track of the bunch.

Closing out on two supremely sing-a-longable numbers in the delightfully mellow Lucky You – with Wantland’s guitar work taking a leaf out of The Edge’s book, for sure – and the hard-edged Insomnia, (how to live) As Ghosts can take its place proudly alongside its seven predecessors in the 10 Years stable and let’s just hope it isn’t that long before the band return.