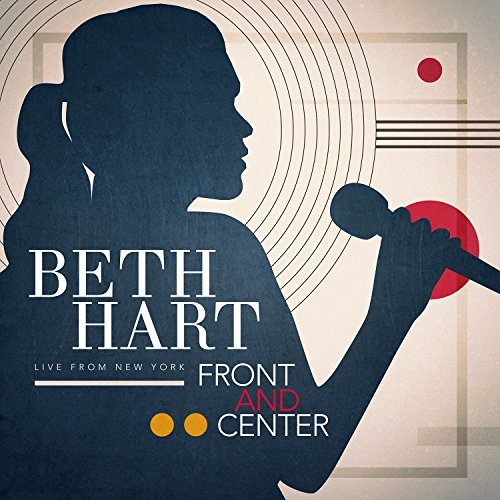 It’s the tremulous quaver in Beth Hart’s voice that’s the most seductive quality of her intimate Front & Center recording held as part of the PBS landmark series of concerts. Not a sign of trepidation this. Rather, a beautifully designed warble that’s an indication how, as an artist, Hart is an ever growing force in the world of power jazz, blues, soul and rock.

Intimate, indeed, is the whole nature of this particular beast of a recording. Let’s Get Together opens proceedings in a nice, light hearted manner. It’s invitation to ‘come in everyone and set yourselves down as I blow your mind.’ Which is what she proceeds to do, particularly as the next two songs – Baddest Blues from Bang Bang, Boom Boom and Jazz Man from Hart’s last solo studio album, the immaculate Fire on the Floor – are both mere precursors for what it to come. 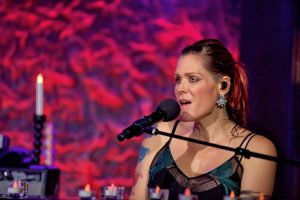 Delicious Surprise is a rambunctious joyride from Screamin’ For My Supper; a high octane blowout which drips with confidence on the grandest of scales. In contrast Broken and Ugly may be a song riddled with self-admonishment –  “I cuss, I drink, I lie, I spit. Guess I really don’t give a shit. Broken and ugly? Yes, I am,” Hart sings – but there is no self pity in this performance of the song from Leave The Light On. The title track of which – the album’s highlight – with Hart’s skilled piano playing at its heart, resonates with the loneliness of bi-polar and serves as a telling reminder that presumed, visual happiness is not always a given state of fact.

There’s also a refreshing honesty throughout. Hart has had her problems as far as addictions and mental health issues are concerned.  It was a subject that used to be kept bottled and hidden from a view. Here, however, it’s openly referred to as being some sort of driving force to her creativity; her engine, if you will. Hard to believe that Beth Hart ever came so close to quitting music because she “felt she didn’t deserve to make music anymore.”

Some of the ghosts, thankfully, hopefully, have become less scary. The melancholy yet richly affirming Isolation sees the singer perched on the stage apron, guitar in hand, so she can see clearly the white’s of her audiences eyes and they, hers. “Yeah, they called me a liar, Why should I care what they say. I am not afraid,” she sings and, boy, ain’t that the truth. Hard to believe she nearly gave it all up, yes, but easy to be grateful for the fact she hasn’t.

Her tight knit, fabulously attuned band back her all the way, with John Nichols guitar standing front and centre. No mean feat, given the plethora of moods with which they are confronted. There’s the fun of Fat Man juxtaposed with the idyllic mournfulness of Saint Teresa while songs such as Love Gangster and Tell Her You Belong to Me shine like torches on foggy hillside in this outfit’s immaculate hands and especially with Sonny Landreth’s guitar work lighting up Can’t Let Go like a rocket cruising the darkest and deepest of galaxies. 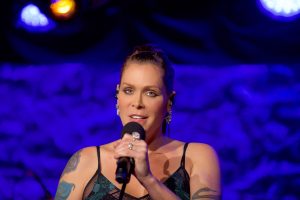 It has been thirteen years since Beth Hart released a solo live album. Yes, she’s toured these shores plenty in the interim but, nevertheless, Beth Hart: Front & Center reveals an artist at the very, very top of her game. An absolute tour de force, this is an album created to cause shivers, trigger tremors, invoke tears and have smiles of absolute delight break free and all from one complete package of music mastery.

Beth Hart may forever be compared to the likes of James and Joplin. The truth of the matter, however, is that many “greats” may well do well to be compared to Beth Hart. “God bless the child with the dirty face, who cuts her luck with a dirty ace.”

Tell Her You Belong To Me

Leave The Light On

As Long As I Have A Song