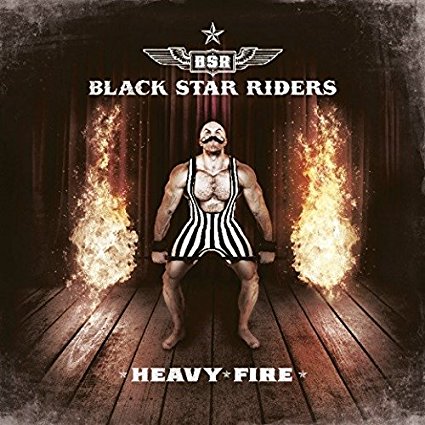 To saddle up and dodge some serious rounds of Heavy Fire from Black Star Riders’ third album is, it has to be said, an absolute privilege. In short, what a truly fantastic slice of Rock this is. In addition, as an album, Heavy Fire is far more accomplished than either of its two predecessors.

The opening titular track is a mere taster for the glories that are to come, the richness of sound billowing like uncontrolled fireworks from beneath carefully monitored blaze. Ricky Warwick’s grit-drenched vocals threaten to combust at every chord, whereas Scott Gorham is truly at his most magnificent during tracks such as When The Night Comes In and Cold War Love.

Yes there are moments of silliness. Who Rides the Tiger is a track that should be locked and sealed in the vaults of time, but otherwise the remaining 10 tracks are exemplary.

Thinking About You Could Get Me Killed is an absolute barn stormer. The zip and zeal in this makes it almost dangerous to listen to, whereas as Cold War Love is a track so drizzled in melancholic longing it is almost as dark as the star these band ride upon. Arguably track of the album, its slow burn opening eases itself into a pulsating joyride and is one number guaranteed to have crowds bouncing during their soon to be performed live sets.

Ticket to Rise is old school, soul-fuelled rock, yes, but with Robert Crane’s bass and Jimmy DeGrasso’s assured drumming driving the ship behind both Gorham and Damon Johnson’s majestic guitar work so Warwick’s voice can given free, rhythmic reign to energise some pretty slick lyrics. Oh, and the backing vocals of Wendy Moten, Gale Mayes and Drea Rhenee help too!

Coming full circle with Fade, a wonderfully constructed, multi-layered offering upon which to close the rockiest of collections, what Black Star Riders have achieved with Heavy Fire is a statement not only for themselves but the Rock world in general