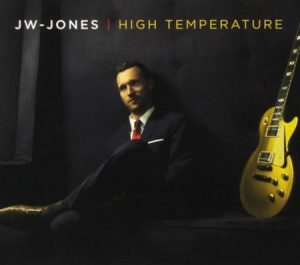 “Safety first” seems to be the ideology behind Canadian guitar/vocalist J W Jones with his latest album, High Temperature.

With some cool licks and some blistering solos, such as that Murder in my Heart for the Judge and the album’s blistering closer, Wham. There are some crowd pleasers, too, such as his duet with Jaida Dreyer on How Many Hearts.

Price You Pay gets things off at a pretty fair pace. The engine of the whole being driven by the fuel that’s injected by Dominic Davis on bass and Kevin McEndree on keys, gives the cut an earthy feel and where the tracks lacks in vocal “oomph”, it certainly makes up for in guitar work as Jones virtually melts the frets on this opener.

From here on in though it becomes an album that’s almost been done by numbers, and with a clear eye on airplay in the country or rock ‘n’ roll charts, rather than anything that could be considered blues. Away Too Long is a clear example of this, with Same Mistakes being a “catch all” number that comes across as thin.

Yet when J W Jones is good he’s very good. Leave Me Out shows his clear ability as a song writer and musician, with Colin Linden’s production experience adding a resonance to the cut that is missing elsewhere. Midnight Blues too is beautifully arranged but, nevertheless, still screams out “push” like some crazed midwife: a call that somehow goes unanswered.

Track of the album is without question Track 10 of 12, Out in the Woods, which is deliciously haunting with its echoes and distortion really driving down hard into the psyche. It’s just a pity it comes along so far down the road.

High Temperature as a title for this collection leads the listener down a path and somehow gets them lost along the way. Yes, it’s nice, yes the guitar and vocals are comfortably stylised. Yes, the production values are expertly attributed so that the sum of the whole glistens like a freshly packaged and recently polished Fender. A fact wherein lies the problem, perhaps, which makes the sum of the whole a little disappointing.