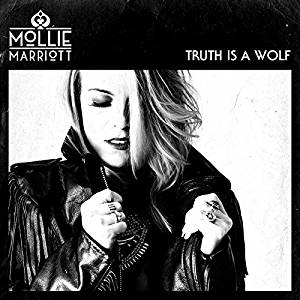 Good Lord, Mollie Marriott’s debut album Truth is a Wolf might have been a long time in the coming but man-oh-man has the wait been worthwhile! Packed with deep-rooted invocation, ballsy blues bravado and sultry, platinum- rich vocals, here is an album to savour.

The delicious opening bars of Control belie the sheer power of this track,  whereas the grandeur of Broken and its sense of regret shine like hot coals on a winter’s evening thanks to its poignant lyrics and supreme musicianship. That Mollie Marriott has been surrounded by the music world’s elite for her entire life – her father is Steve Marriott of Small Faces & Humble Pie fame, her step-father is Joe Brown – is apparent: yet never once does her own singular level of inventiveness drop nor her eye waver from the prize of delivering something special.

Give Me A Reason is a rich-textured heart-breaker dipped in smiles, with some vivacious backing vocals that simply add more velvet to its plushness; Run With the Hounds is a firm indicator of Marriot being a fine songwriter, it’s upbeat vibe and inner turmoil reminiscent of Stevie Nicks and Alanis Morrisette at their lyrical best.

That she can also attract the best in collaborators stems not from the “who, not what you know stable” but rather from a deeply ingrained talent. Paul Weller’s contributions to the haunting, superbly executed title track and, also, King of Hearts, brings to the full the seedy, grungy best of the latter while adding fortitude and resonance to the former. The opening bars of Truth is a Wolf are fittingly spectral for this time of year, also.

Love Your Bones is tangibly restrained yet discretely bold in its output; the backing vocal harmonies again providing cadence, whereas the sheer beauty, honesty and energy of Transformer – along with Judie Tzuke’s shared writing input – marks it as the track of the album by a short head.

This is the real beauty of the album. Yes Marriott can Rock it out with the best, but her more sultry, smoother RnB side is every bit as infectious.  Fortunate Fate is an example of this. A song that could easily have been performed by any of the Soul queens of yesteryear, but here is delivered with a punch to the solar plexus that reverberates long after the song’s close.

Closing on My Heaven Can Wait leaves the listener begging for more and it can only be with a sense of deep rooted anticipation to learn that Mollie Marriott is set to play a string of dates across the UK.

If Truth is a Wolf is anything to go by the venues into which she is booked to support Bad Touch this autumn best check their building insurance because the roofs are about to be blown off and that’s for certain.

Give Me a Reason

Run With the Hounds

My Heaven Can Wait