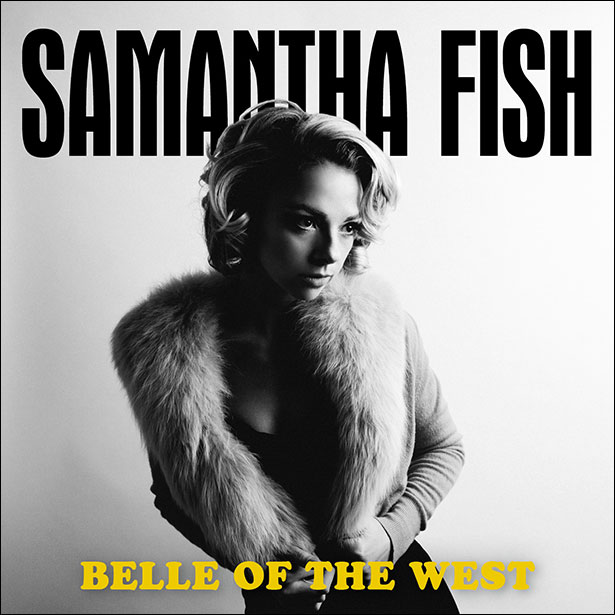 As refreshingly vibrant as a rainbow on a dew moistened autumnal morning, Samantha Fish brings it on home magnificently with her new studio album Belle of the West.

The opening American Dream is a beauty. The metronomic drum beat with which it is introduced sets the ‘feel good’ rhythms, with Fish’s own cool vocalisation, unfaltering acoustic guitar and clear writing abilities coming to the fore from the off. Added to this are the underlying fife of Sharde Thomas and mandolin of the album’s producer Luther Dickinson which goes to serve up a distinctly wholesome ‘down south’ feel to the number.

That the album has been recorded at Zebra Ranch Studios in North Mississippi has added a country-styled freedom to the collection. Need You More is an absolute gem of a song that could easily have been penned by Parton at her peak, whereas when the mood shifts up a notch with Cowtown Samantha Fish’s blues roots burst forth like a rocket on November 5th.

There are covers here too, not least of which is R L Burnside’s Poor Black Mattie. Here featuring cutting edge bluesman Lightnin’ Malcolm, the rich intonation of Burnside’s lyrical mastery are given a softer but no less edgy reboot, with Malcolm’s sassy, cheeky playing and deeply gritty vocals providing a party feel that are hard to ignore; it’s beat as inviting as chocolate on a bad day.

On any day, come to that.

The title track, too, originally penned by Jumbo Matheus, has a distinctly Crystal Gayle kind of vibe going on, but with a subtlety of delivery that is as pure as it is captivating.

There are eleven little slices of heaven contained on Belle of the West, true, but stand outs have to be No Angels. Its energy and drive are mesmeric, whereas its almost dangerous backbeat is guaranteed to have volume buttons edging ever nearer maximum from the off. Great too is Nearing Home featuring another rising star, Lillie Mae, that as a result contains a timbre that’s devastatingly soul embracing in its multi-styled delivery. Then there is the joy that simply bleeds out the album closer, Gone for Good.

Belle of the West is a beautiful album. It’s richness of tone, superlative production values and overall delivery a landmark not only in Samantha Fish’s already much lauded career, but also in those fortunate enough to appreciate its calibre.

Blood in the Water

Don’t Say You Love Me