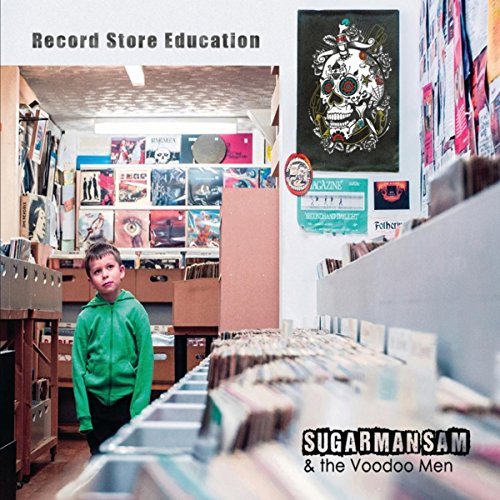 The more observant will notice that this is a little late. Nevertheless, when an album is as earth-quakingly brilliant as Record Store Education from Sugarman Sam & The Voodoo Men – and a debut album at that – then who am I to let couple of years get in the way?

In short, this is an album packed to the machine heads with eight of the most sublimely created, orchestrated, developed and performed blues tracks imaginable, with a faultless cover of one of the all time classics thrown in for good measure.

That should pretty much sum it up. It doesn’t though. The album really is that good, more lyrical waxing is more than a little in order. Sorry about that!

Who knew Hampshire could spawn a blues-rock machine the likes of these fresh-faced whipper-snappers. Take a listen to the flights held within the opening (Blues) My Shining Light and dare to wonder whether someone the age and experience of, say, John Mayall hasn’t crept into your music playing device of choice.

The rich tones of Sam’s vocals and gut-wrenching guitar work chopping and cutting out the chords like some sort of hellish lumberjack, invokes such a wrathful, nerve-tangling glee in the listener it’s as though that old mate of Robert Johnson has popped along and brokered a similar bargain with the band.

Gareth Goodwin’s slick bass control, here and throughout, is that of a younger, hungrier Glenn Hughes, whereas David Miller’s thumping drum work – particularly on Virginia, which underpins the whole extravaganza in the way pneumatics underpin construction work – is akin to the good stuff played by Ian Paice in his heyday.

And as for the delicious cool-handed dexterity provided by Paul McCormick’s sensational keyboard mastery, well, herein lies the mellowness and tone so often overlooked by the consensus in favour for raw power. Some Kind of Voodoo and Blues Deluxe best demonstrate the poise McCormick offers; the patience to allow a melody to breathe and grow alongside the main riff and beat of its surroundings. Beautiful beautiful stuff indeed.

So that leaves Sugarman Sam himself. With the question “where have you been all my life?” rocking and rolling around the inside of my skull, it is actually hard to sum up just how immaculate this player/singer/ songwriter’s work is. Falling to Pieces is old-school blues the likes of which few have perfected in this way, whereas Stone Cold Man deliverers the edginess of a BB King in his pomp, together with all the energy, lust and bravado of Stevie Ray Vaughn on fire.

Think I’m exaggerating? Then do yourselves a favour, go stream this baby and prepare to be disappointed by one of the finest covers of Sunshine Of Your Love ever put into the field.

Disappointed, was that? Yes, that’s right. This is the weakest track of the nine – the last track at that – and is only absolutely, blood-boilingly, nerve-shreddingly awesome! And that’s the ‘weakest’ track’ of the lot by the way!!

To paraphrase poor old Malvolio, some have greatness thrust upon ’em. Indeed they do. From out of nowhere, along has come Record Store Education (let’s be fair here, even the title is pretty bloody cool, right?) by Sugarman Sam & The Voodoo Men to become as indispensable as beer on a Friday nigh.

A complete blues wet dream of an album and no mistake, and if you haven’t already make sure you order it. Like NOW!!!

Some Kind of Voodoo

Sunshine of Your Love