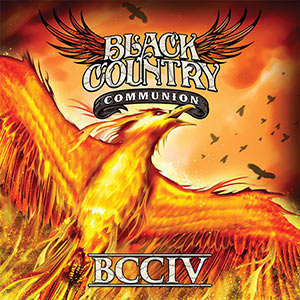 Once upon-a-time it would have seemed pretty inconceivable that the day would come when Black Country Communion would be releasing a fourth album. Yet here we are, BCCIV is with us and goodness me isn’t it a blessing that any reported differences have been set aside in order to create this a quite remarkable album.

The term ‘Supergroup’ may be frowned upon by some, but that’s exactly what Black Country Communion are with each individual bringing their own brand of excellence to the party and sprinkling every track with their own particular doses of super-sensuous fairy dust.

Collide is a raucous roustabout of an opener though, the delicious thumping rhythms grinding out a path for those cuts which follow in its wake. With Glenn Hughes’ voice and meticulous bass heroics, Jason Bonham’s kit work providing a relentless, faultless reverberating beat as Derek Sherinian’s keys juxtapose the out-and-out monolithic power of the track with some divine sensitivity, here is a crowd pleaser if ever there was one.

Joe Bonamassa might easily have sat tight on the delight that is The Last Song For My Resting Place – the album’s highlight by far – and kept it in reserve for his next solo outing. Not a bit of it. Recognising that its tone and fiddle based accoutrements are tailor made for the balance being striven for on this album, it is placed at #3 on the track list.

JBs voice has rarely sounded better, his playing nevermore assured. But it is the incorporated fiddle that raises the bar and keeps pushing, shoving and hauling the track to the very highest of heights.

If the album as a whole wobbles a bit it’s when the band veer towards the safer ground with tracks such as Wanderlust which sounds a little too Asia-like for comfort. It’s not that this is a bad track – it isn’t and would sit nicely on just about any rock album anywhere – but here it just doesn’t seem to quite fit amongst some of the contemporary gems surrounding it … and particularly at 8+ minutes in length.

The transcendent Love Remains is far from ‘safe’ though. A poignant ode to the fact that all that’s left once we are gone is love, whilst Awake contrastingly tracks the desire for us all to live for an eternity. Each of these manages to pick out Sherinian’s special genius in providing a platform from which his cohorts can build towards a thunderous climax.

The mellow closeness that seeps from When The Morning Comes is an absolute treat. A driving song encouraging images of life’s highway to endlessly stretch out , perceptively underlining that camaraderie is everything. A Zep-esque joyride into the oblique and irrefutable, When The Morning Comes is furnished by some quite exquisite playing that gets the mind whirring from first bar to last.

All in all BCC IV is the sum of its parts: a consummately delivered, exquisitely packaged container filled with jubilation, that sits amongst the finest albums 2017 has yet to offer.