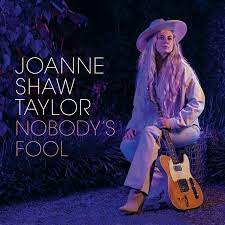 Smart. Accomplished. Brilliant. Joanne Shaw Taylor nails her skills to the wall with her latest album, Nobody’s Fool, and shouts loud and long from the rafters: I’m Here. Truth be told – a Dirty Truth, you might say – we’ve known that for quite a while.

This is Shaw Taylor’s ninth album and is, unquestionably, the Brit Blues Maestro’s most complete album. Whether this is the influence of Joe Bonamassa, simply a coming of age born from thirteen years of becoming an overnight sensation or simply the eruption of a bubbling volcanic talent, who cares? What’s important is that Nobody’s Fool sees a seismic shift in the singer/songwriter’s confidence.

From the off Shaw Taylor takes control but in such a way she doesn’t need to beat you over the head with what she’s delivering. The album’s title track is catchy, riffy and poppy. Yet underneath lies a steel that glimmers with experience.

Just No Getting Over You is moodier, more aggressive, but highlights just how more succinct her song writing has become. There’s barely a stray vowel let alone a wasted beat, while the accompanying horns pay homage to the guitarist’s love of all manner of genre, particularly Motown. Stevie Wonder himself might well be proud to call this one of his own.

There’s also a lot Shaw Taylor’s personality on display here. Her founder and mentor, Dave Stewart, appears on the Eurythmics mega-hit Missionary Man which here is cut with a Blues edge sharp enough to force a close shave. On the other hand, the beautifully haunting, ‘it’s not you, it’s me’ ballad Fade Away exhibits a delicious maturity and empathy, made even more astute by the glorious cello contribution delivered by Tina Guo.

Stand out track, though, is the artfully structured, almost Prog intoned The Leaving Kind. As rich a wagonload of tiramisu, this is not simply an album defining track but also one that surely points along a highway littered with positivity and much-earned recognition.

Surefooted and sprinkled with gold, Nobody’s Fool is Joanne Shaw Taylor’s most significant album to date and one that surely heralds much in the way of awe from fans and peers alike.