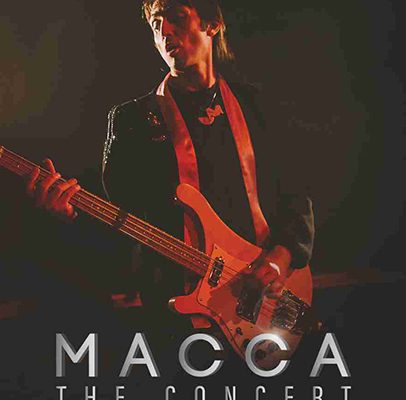 It was exactly a year since its launch that Macca: The Concert came to the Floral Pavilion, New Brighton

The show, a sort of sequal to Let it Be, that played the West End and all around the world, began its life in nearby Southport exactly 12 months to the day. A first of its kind, it celebrates the music of Paul McCartney with the cast of Let it Be including Paul lookalike Emanuele Angeletti, who the cast kept joking was ‘from Liverpool’ even though his ‘scouse’ accent kept morphing back to his native Italian.

But he can sing and most of the time he sounds like Macca. With a good line up of backing musicians including Luke Roberts (Ringo in Let it Be) on guitar, John Brosnan (George in Let it Be) on lead guitat and vocals, Paul Canning (John in Let it Be) on piano and bass guitar, and Jill Schoonjans as Linda McCartney on vocals, autoharp, keys and percussion.

As a back drop to the show there were projected iconic images of Paul and his band, including Denny Laine, in their youth, with some poignant shots of Paul with John Lennon and George Harrison.

The concert concentrated on McCartney’s music post Beatles, the first half recreating the Wings Over the World 1975-76 concert, with the second half throwing in great Beatle tracks for good measure.

With songs written by McCartney and co it would be difficult not to put on a popular show. The music is good and most tracks well remembered, with the audience singing along and some bopping. In fact the band encouraged the audience to join in.

The show kicked off with a rousing rendition of Jet with flashing strobe lights and dry ice misting from the stage, before moving on to a moving Another Day. Angeletti’s Long and Winding Road showed off his Macca vocals, followed by a robust Let Me Roll It.

Later a mellow Blackbird foregrounded the Macca lookalike’s dulcet tones in a solo followed by a sad My Love by the band, written by Paul after John passed away, with a projection of Paul and John above.

A rousing Live and Let Die pounded the theatre with full blooded noise with Angeletti on piano and great lighting design. The second half “said goodbye to bad haircuts and flairs” and moved into the 80s with a lilting Pipes of Peace followed by a Beatles throwback Got to Get her into my Life (1966) before moving on to Ebony and Ivory a track recorded by McCartney and Stevie Wonder with great harmonies from the band.

The show ended with a rumbustious Back in the USSR and Get Back, before slowing down for a lyrical rendition of Mull of Kintyre with beautiful projections of the area where Paul and Linda made their home.

And then everyone was on their feet for I saw her Standing There before the ubiquitous Hey Jude rounded off the show with the audience in full voice. This is a tribute show and as such it does what it says on the tin. But Angeletti, who taught himself to play left-handed like his icon, is no Paul McCartney although his mop top and slim frame make him a good lookalike. His voice is comparable but his interactions with the audience lack something. The early Beatle numbers also don’t have the ‘rough urgent’ sound of the 60s group.

However, if you like McCartney’s and the Beatles music this is a nice little show to catch some memorable music and dance and sing with other aficionados around you.

If you missed it or want to see it again it will be showing at the Southport Theatre on March 1st.