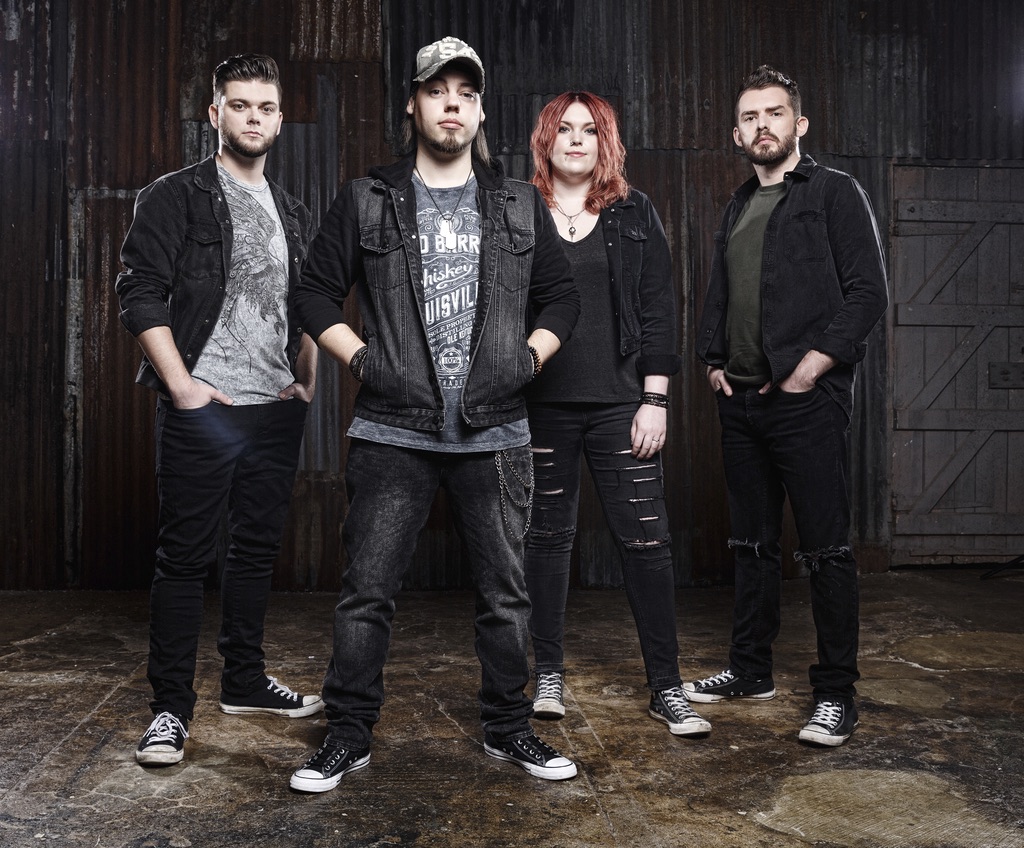 To say the rise of Midlands based rockers Stone Broken is on the way to being somewhat meteoric would be an understatement. Since forming in 2013, the band have self-financed their debut EP The Crow Flies, self-funded and released a hugely acclaimed debut album All In Time  – with tracks from which going on to receive heady amounts of airplay on Kerrang Radio and Planet Rock Radio – and being invited to support legends such as Glenn Hughes on sell out tours across Europe.

As a result, all this activity has led to the Walsall four piece being picked up by the Spinefarm record label and, subsequently, the recent release of their blisteringly brilliant second album, It Ain’t Always Easy. An album, it should be said, that reached #15 in the main charts and #3 in the rock charts within days of release.

Oh, yeah, and a recent sellout headline UK tour of their own.

“It’s our second album and the first with the help of Spinefarm and the way it’s been received has blown all of our expectations out of the water,” the band’s frontman Rich Moss said with a wry chuckle. “For it to get placed on the National and Rock charts so highly, we couldn’t have hoped for a better launch pad for the album. I have to say, too, that its largely down to the fans, The Broken Army, who have been behind us all the way and it is genuinely all down to them that its been as successful as it has been so far.”

What’s really striking about It Ain’t Always Easy is that it’s sound is much bigger and much more live in its vision. The bass work of Kieron Conroy alongside the heavy beat supplied by drummer Robyn Haycock are all majestically underpinned by Chris Davis’ searing guitar riffs and Rich’s own gravel-laden vocal style. It also contains songs such as I Believe, Home and The Other Side of Me that are all clearly personal. “That’s the sound we’ve always wanted, with lots of guitars and particularly heavy drums going on,” Rich explained.

“It’s something we’ve developed alongside our producer, Romesh [Dodangoda], who also worked with us on All In Time. We basically task him with making what we do sound as big as he possibly can, which is exactly what he does every single time. It’s quite unusual for a British band to sound like we do I think. That sort of rich, big American flavour to the songs is what we were hoping to achieve and, with Romesh’s help, we’ve managed that.”

“As to the lyrics, I kind of have a love/hate relationship with writing,” Rich confessed. 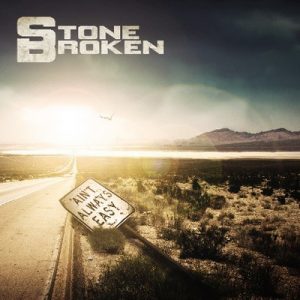 “Some songs will be easy to write, others I’ll really struggle with. For instance, Heartbeat Away was pretty easy because I knew exactly what I wanted to say about domestic violence, whereas I Believe I had to rewrite the verses about four or five times simply because I didn’t think I was getting my point across. I do love writing songs in general, mainly because of the almost instant gratification it provides when you listen back, but sometimes it’s harder than others so, yeah, its a bit of love/hate thing.”

“What happens is that I’ll write the majority of the material, but we’ve always made a point of every one of us being 100% confident in the song else it doesn’t get recorded. For instance with this album, two days before going into the studio, I felt two of the songs weren’t good enough so we binned them.”That meant I obviously had to come up with two new songs in two days. If there’s one thing you’ll learn about Stone Broken it’s that we have a knack putting ourselves in these kind of situations but, at the end of the day, we all have to be totally happy with the songs. After all, they have to last, hopefully, for years and years out on the road.”

The next question then, is pretty obvious. Which two songs made the album in such short shrift? The answer for one of them, at least, may be a little surprising. “I wrote Anyone in about three hours, which was the fastest, start-to-finish song I’ve ever written in my life. That three hours includes demoing the track as well, by the way,” the singer/songwriter says.

“The other was Home (the song from which the album’s title derives). At the time of writing it I was feeling kind of stressed, what with the recording schedule looming and the pressure to get it done. I just got to thinking about the feelings of people on tour – like Chris and Kieron, who both have families – and what it must be like to leave them behind.”

“I’m lucky inasmuch as my fiancée is Robyn, our drummer, and we don’t have any children, so we don’t have to leave anyone behind when we go on the road. I just wrote a song for those guys who do.” 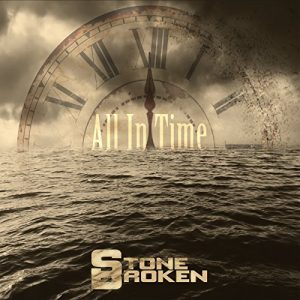 Ain’t Always Easy was released earlier in March, eighteen months after All In Time. The band’s recent sold out gig at Chester Live Rooms was also filmed for video release at some point and there are quite a few gigs lined up throughout 2018, including trips to Wales, Spain, Ireland and a Friday night headline gig at Steelhouse Festival in the Brecon Beacons in July. Busy doesn’t do it justice.

Before all this though, the band will be playing The Garage Sound Festival, Madrid, on June 8th, which will give them, hopefully, the chance to catch up with former Deep Purple frontman, legendary bassist and vocalist of Black Country Communion, Glenn Hughes, who Stone Broken supported across Europe in 2017. A slot which was all a bit last minute.

“We’d set twelve weeks aside to write then got invited to support Glenn Hughes on a six week tour which would obviously eat into those twelve weeks. It was a no brainier decision, in all honesty. When they come around, you can’t refuse chances to open for a legend the likes of Glenn Hughes. You can’t buy an opportunity like that or the experience he helped provide for us.”

“It was actually quite brave of him to take us, a relatively young band, on such a huge tour. This is a man with a justifiably massive reputation, so for him to place so much trust and faith in our ability to perform was incredibly generous of him. He really looked after us, gave us advice on different things which was always welcomed, and generally made sure we were looked after on the whole tour.”

“Then, of course, we got to see how he played – how he managed a crowd, how he spoke toaudiences: his stage craft, how the show flows – and that in itself was a huge learning curve for all of us I think. It was a sort of a Masterclass 101 in how to perform on stage.The whole tour was just an incredible experience and we’re all very grateful to have been given the opportunity.”

Both Hughes and Stone Broken, of course, are from the same neck of the woods. “That came up a lot in conversations, particularly as Chris is from Cannock, same as Glenn. Every time he could, Chris would mention it,” Rich laughed. “And Glenn’s mad keen on football too, so that was spoken about a fair bit as well when we got together. It was just a great time.”

Having seen the band in that support slot and, also recently on their last tour, it’s clear

that Stone Broken as a band-`and Rich Moss as an individual – is very much at ease on stage, which shows in the Sold Out banners splashed across the posters. A feeling that, one would assume, is hugely satisfying.

“When we looked at some of the venues that had been booked, we all thought ‘man, that’s a bit ambitious!’” To us we’re still this rock band from Walsall that’s playing a few shows here and there, but the way in which the tour sold really took our collective breaths away.”

“I think a lot of it comes from the fact last year we supported a lot big names, like Glenn for instance, which meant we could reach a lot of people we might not have done otherwise. That’s really worked for us. The majority of the artists we supported were sold out and the atmospheres were always great.”

“I have to say as well that the team behind us are brilliant and we have complete faith in everything they do for us. They know exactly what they’re doing and nailed absolutely every venue.” 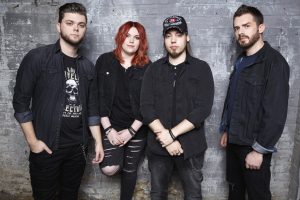 A lot of musicians and singers hail from families with music etched into their DNA. Not so Rich Moss, it seems. “One of my mum’s ex-boyfriends used to play guitar so I was sort of exposed to music, without being really over exposed to it. I think because he would play in the living room, it kind of stuck and I soon realised I wanted to play something. I actually started off playing drums but there was no way my parents were ever going to allow a drum kit in the house, so they bought me a guitar … and some headphones!” Rich laughed.

“That was when I was in my early teens, fourteen or fifteen or so, but there wasn’t really any particular song or band at that time that inspired me to play. Oddly enough, and I was only thinking about this the other day, what I used to do was have my acoustic guitar in the living room where the TV was. When the break came on, I’d pick it up and play along to the music on the ads, which sort of trained my ear to what notes did. In the beginning, honestly, the guitar was just another instrument and I had really no ambition to play professionally, not then.”

“It was only after seeing Alter Bridge as my first ever rock gig that I thought: ‘Man, that’s what I want to do for a living.’ That was at Trinity Hall in Wolverhampton about ten, eleven years ago, and the combination of sound, energy and excitement they created was genuinely like nothing else I’d ever experienced before. That was it then. That was the turning point for me. That’s when I knew I wanted to do what they were doing and achieve what they were achieving. Hopefully, now, we’re headed in the right direction to do just that.”