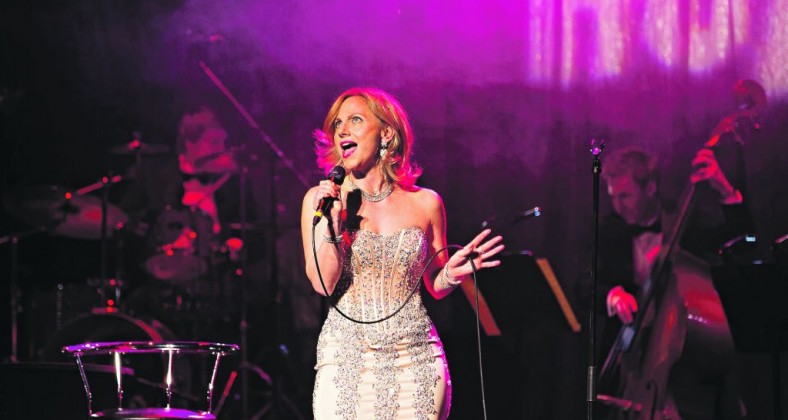 Like a warm blanket folded around a pillow of beautifully delivered music and song, Liza Pulman nearly pulled off the impossible by almost outdoing Barbra Streisand herself. Aided by her own six piece band of wonderfully talented musicians and, also, the incomparable Brighouse & Rastrick Brass Band – Brass Band of the Year, 2017, it should be said – this was a night that will live long in the memory.

Such is Streisand’s infeasibly vast repertoire the song list is as long as it is varied, with Ms. Pulman nailing every single chord, tone and crescendo with aplomb. Not only does the set comprise of the standouts such as Evergreen or The Way We Were which here are given a whole new lease of life in this most fabulous of auditoriums by this most fabulous of ensembles, but also less well known songs too.

You Made These Pants Too Long underlines the native New Yorker’s wit and guile, which in the hands of the native old Yorkshire raised Pulman – herself one third of the comedy trio Fascinating Aida – takes on a whole new feeling of gentle ribaldry.

There are stories aplenty, lots of laughs too, but this isn’t a life story by any stretch. Rather the show is a celebration of the career of one the finest, most diverse and instantly recognisable artists to have ever graced a stage or screen.

And boy does Liza Pulman celebrate that career in style!!

Don’t Rain On My Parade kicks things off on a high and things simply move upwards from there, with Joe Atkins’ deft touch on the wheel of the good ship orchestration guiding things safely along.

It’s no mean feat incorporating such a powerful entity as a full brass band into some of the most delicately, finely tuned songs ever written. Yet You Don’t Bring Me Flowers has rarely been performed with such tear-jerkingly astonishing power, with Pulman’s majestic vocal prowess more than able to keep above a scale of music that might so easily drown out lesser performers.

The Way He Makes Me Feel from Yentl – for which the film won an Academy Award and made Streisand the first woman director to win a Golden Globe back in 1983 – has the hair at the nape of the neck rising to attention even at its memory. As does an astonishing New York State of Mind.

Closing on the sublime People, this was a night of sheer joy. A classy, warmly produced, exquisitely delivered night underscored by the numbers of people on their feet at its end.

Liza Pulman: Sings Streisand is on tour. For Information: http://www.lizapulman.com/live