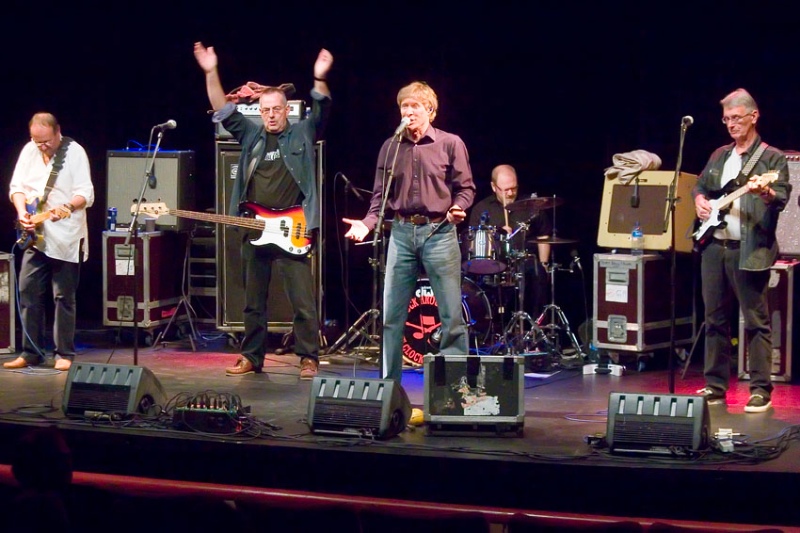 Bells and whistles are all very well, but there really is no substitute for rock solid blues played at its very, very best. The Blues Band we’re back beside the sea on Wirral and, boy, do these guys know how to blow up a storm.

Paul Jones, courtesy not only of his time with Manfred Mann but also as BBC Radio 2s notable Blues Show host, may arguably be the most recognisable ‘face’ of the band. Rest assured though, Dave Kelly, Tom McGuiness, Gary Fletcher and Rob Townsend are his musical equal. As a result, any gig at which these five perform is sure to be white hot yet steeped in cool, cool blues at its finest. With a set standing at a smidgen over two hours, there was something for everybody to enjoy.

Dave Kelly on guitar and vocals performing Statesman Blues set things off, with the first tribute of the evening to the late, great Fats Domino coming hot on its heels with Let The Four Winds Blow. If the great man was looking down on the Floral Pavilion from his all too recently acquired berth tonight, his chest would have surely swelled with joy at how well this quintet honoured his memory: Paul Jones’ rich vocals and slick harp playing a fitting testament indeed to just how great a player Fats was.

The rich bounty of People Get Ready brought the gospel blues home, with Jones’ lightness of touch and depth of understanding lighting up the auditorium. Dave Kelly’s I Am The Blues, similarly and rightly, brought its own rapturous response from the faithful there gathered.

The highlights were many. Blind Alfred Reed’s How Can A Poor Man Stand Such Times and Live was one that came early, with Jones’ own Sit Back Down – complete with Rob Townsend’s superlative drum skills and Jones’ exquisite harmonica playing duelling mid-song – set the feet tapping. So tight are the band, it might be feared that something might snap. Not a bit of it though as the lead vocals change from member to member, with each bringing their own little bit of magic to each song.

Tom McGuiness singing and playing guitar on She’s The Wrong Woman was an absolute joy, whereas Gary Fletcher – temporarily exchanging his bass for acoustic guitar and ukulele respectively – delivered My Love Made You Wrong and Say You Will so well, both might well have made grown men weep with pleasure.

There were tributes to all the blues greats. Howlin’ Wolf’s Down In the Bottom was given Dave Kelly’s, deepest, sliding best. Muddy Waters’ Can’t Be Satisfied had new light shone on it through old windows. Nellie Lutcher’s Fine Brown Frame came out as freshly as the day it was written.

Yet it was the was the second tribute of the night paid to Fats Domino that really stirred the soul. If ever a Walkin’ To New Orleans has ever been played more passionately or evocatively than it was this evening, then whenever it was, it must have been some performance to behold.

Closing out on Louis Jordan’s Let The Good Times Roll had the packed audience on its feet again in praise of The Blues Band. Little wonder. They knew they had just witnessed something special and, without a bell or whistle in sight, the good times rolled from beginning to end!