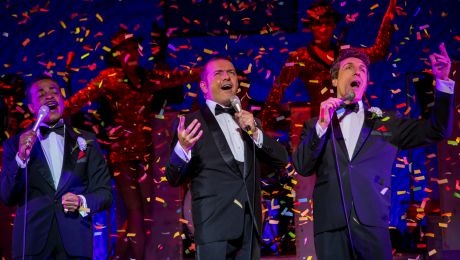 The origins of this show are “A Place in the Sun” which really is an ideal thought for a cold February night. While the Liverpool Empire does not quite double as the show’s Las Vegas venue, it certainly serves up the kind of music associated with these Stars.

The Rat Pack offers a luscious full-blooded night out with the type of luxurious arrangements that warm you like musical comfort food. It is rich in velvety tones that reach down to your very soul. It whisks us back to a bygone period – although a lot of the jokes were rather older. The liberal sprinkling of banter, especially in the second half, gave us a flavour of the characters behind the music. Although the continual reference to Dean’s drinking was a bit tedious and perhaps he should be billed as Dean Martini.

Several of the Politically Correct brigade may suck their teeth at much of the material touching on race and ethnicity. But they are accurate for their period.

Wonderfully evocative of the era were The Burelli Sisters (Amelia Adams-Pearce Laura Darton, Rebecca Parker and Joanna Walters). Their choreography was well-detailed by Mitch Sebastian, the man behind the whole venture.

Although a tribute is not a straight impersonation Garrett Phillips Frank Sinatra is by far the closest to the sound of the real thing I have heard. And David Hayes Sammy Davis Junior and Keiron Crook’s Dean Martin are a real joy to hear. While Nicola Emmanuel is a brilliant singer she does not quite give the feel of the real Ella Fitzgerald.

But as a celebration of a certain era it has the right pizazz with excellent musicians and rich, classy arrangements. To be Frank, it’s a fun-filled musical night.

Rat Pack, Live from Las Vegas is at The Liverpool Empire until February 17. Click HERE for Tickets