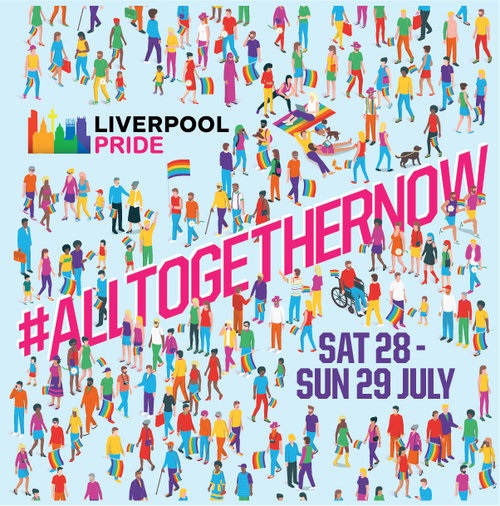 Liverpool Pride is back next weekend and the city is set to be awash with the colours of the rainbow as this year’s theme#AllTogetherNow promotes unity for the LGBT+ and wider community.

The free two-day festival takes place on Saturday 28 and Sunday 29 July with a change in location and another fantastic line up for 2018.

For Saturday’s events the festival will go back to its roots with a return to Tithebarn Street steps away from the city’s Gay Quarter. Sunday’s events will take place across the city with a Sundae Funday festival hub at The Bluecoat on School Lane.

The weekend will begin with the ninth annual Pride March on Saturday 28 July. Beginning at St Georges Hall participants will weave their way through the city in a sea of colour celebrating the festival theme #AllTogetherNow and finish at Moorfields.

Following the annual march attention will turn to the day’s festivities with three stages packed full of entertainment.

The Manchester Airport San Francisco Stage has been carefully curated by the Liverpool Queer Collective who have created a unique cabaret programme which is not to be missed.

Day two of Liverpool Pride takes place on Sunday 29 July with Sundae Funday at The Bluecoat. The family focused day will feature dance, arts and craft activities, food market, and barbecue in the Bluecoat Garden, alongside Pride events at the International Slavery Museum, Walker Art Gallery, Museum of Liverpool and Liverpool Cathedral.

Returning for the third consecutive year the Come Out of the Shadows campaign will light up the cities most iconic buildings in the colours of the Rainbow and Trans flags in a city-wide display of solidarity for the LGBT+ community from 19 July to 2 August. Buildings lighting up include St John’s Beacon, Anfield, St Georges Hall and Liverpool Town Hall.

In addition to Pride weekend a whole host of LGBT+ events will take place across the city to celebrate the month of Pride.

Pride at the Pictures presents All About My Mother on Monday 23 July and Divine Divas in association with Brazilica on Monday 30 July.

For the full festival programme including all community events visit liverpoolpride.co.uk