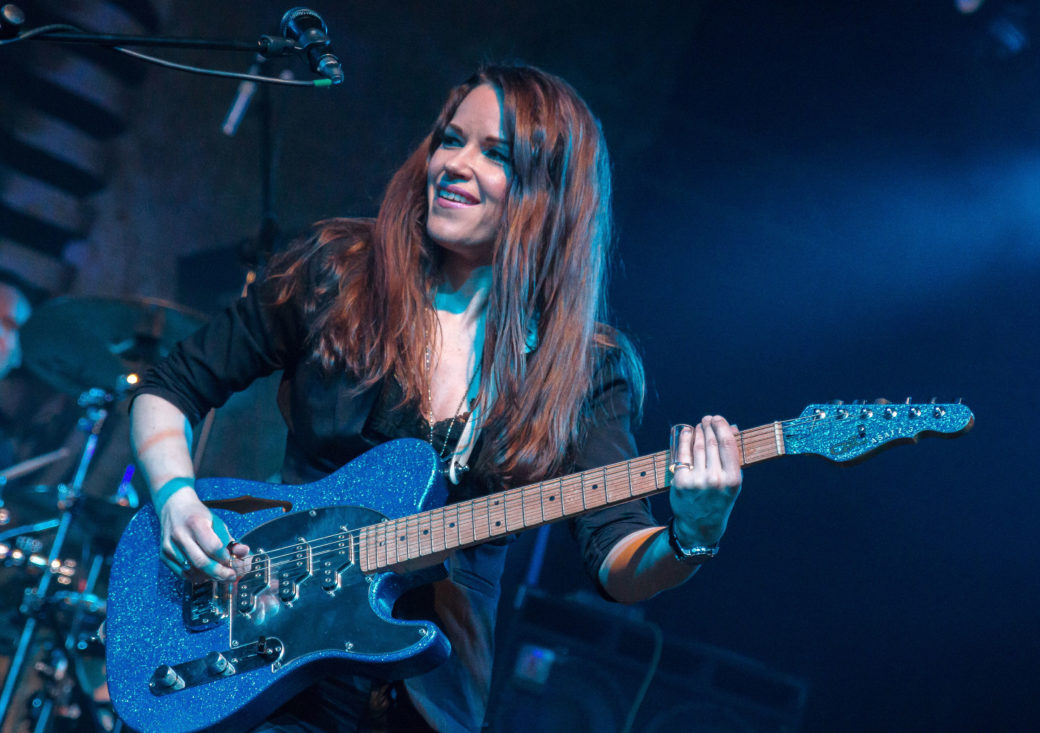 What a fantastic night. Finnish blues queen Erja Lyytinen totally lit up the small room of The Chester Live Rooms with her smile, then ripped the place apart with her music.

With her latest album Stolen Hearts receiving widespread and justly deserved acclaim, now was the time to see the slide guitarist at her very best: performing before an intimately small audience in a room bedecked with candlelight which only served to add to the atmosphere.

Starting off with a slow, meandering City of Angels, what’s clear from the off is that not only is Erja on top form, but so are her band. A tight-knit trio, Juha Verona’s relentlessly throbbing bass lines bass, Harri Taittonen’s electrifying keys and Kai Jokiaho’s pulsating drums drive the show powerfully from behind so that Lyytinen is given free rein to rock out.

Everything’s Fine, with its massive blues-based heart, is made all the more sultry by a gritty guitar break that cranks up the volume more than a notch or two, while the prog-fuelled Black Ocean sees the guitarist’s fingers fly across the fret board like a spider on speed.

Erja’s amiability and genuine, well, niceness, leads her to being totally accessible to her audience, engaging with them from the moment she steps on stage. Don’t be fooled by her diminutive stature either. This is a giant amongst blues guitarists and she swiftly uses her strength to the maximum.

Stand out of the evening, the pain infused Slowly Burning with Lyytinen’s voice finding new power and range, while her guitar bleeds passion and angst. A truly emotional experience to witness, which had the audience entire on their feet at its climax.

With a guitar solo incorporating tributes to the masters such as Robert Johnson and Muddy Waters, the audience is eating out of her hand and lapping up every single chord she rips out of her sparkling blue guitar.

Stolen Hearts becomes an extended poppy sing-a-long which has everybody smiling from ear-to-ear. Rocking Chair is a song of singular majesty, whereas her version of People Get Ready is one that will live long in the memory for its sheer size and ambition. A deliciously revamped Steamy Windows takes on even sexier metaphors as a set closer, particularly when it segues briefly into an almost spontaneous Like A Virgin at midpoint.

Reinforced by Taittonen’s sweeping Hammond mastery, the track – and the gig – concludes with a proper firework climax brought on by Lyytinen’s outstanding agility, pitch-perfect vocal style and an energy that simply roars accomplishment at every turn.

To say that the assembled raised the roof in adulation would be an understatement. As Erja Lyytinen and her band took their bows, promising to return – though hopefully before a larger gathering, once word of her capabilities spreads – the sense of warmth and out-an-out admiration that filled room almost surpassed that which had been witnessed. A fantastic night indeed that – hopefully – will be repeated sooner rather than later.