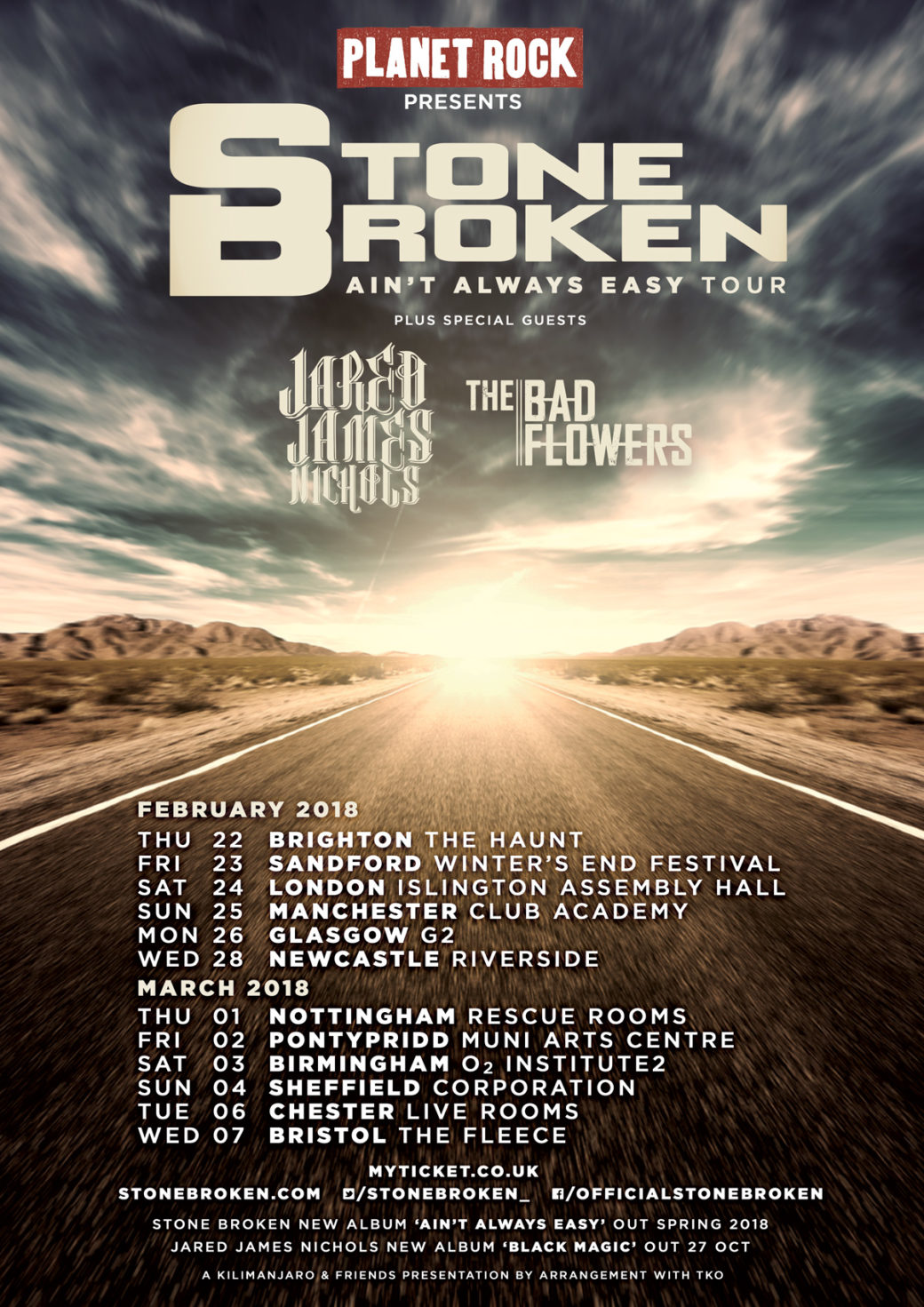 There are many superlatives that could be used to describe the gig provided by Stone Broken and their supports on this tour of Ain’t Always Easy Jared James Nichols and The Bad Flowers: Astonishingly good and Truly, Truly Magnificent are a couple. Yet simply Wow! Seem to sum it all up pretty nicely too.

This was one of those gigs when everything goes right. Even the trains were on time, a noteworthy experience in itself. A sold out, acoustically crystal clear sound, three bands on the up and a general sense of electricity in the air all adding to the scene like tonic to gin, rum to coke or lime to lager. Okay, maybe not the last one!

Bang on time the auditorium lights not so much dim as collapse, with The Bad Flowers storming into their opening salvo, Hurricane, taken from the recently released and highly regarded, self-funded-debut album Starting Gun. As a taste of things to come, this held near-mythical portentousness: raw, ragged and rock solid, Tom Leighton’s vocals seared the room while his guitar playing almost threatened to go one step further and burn the place down entirely. These lads and their audience are clearly having a blast.

Secrets, sung with an unconfined joy evident in the flailing, empowered drumming provided by Karl Seleckis his hair flailing in metronomic delight, is a stonking song built to be performed live. Dan Tonks’ immaculate bass playing – particularly during the album’s debut single Thunder Child –holds everything in place, while Leighton provides the bells and whistles with astute aplomb.

A seriously impressive thirty minute set that leaves an even greater understanding as to why these boys from the Midlands are so highly regarded.

As is Jared James Nichols. His ballsy guitar playing is quite simply phenomenal in the live arena, giving tracks from his latest release Black Magic an ethereal and, at times, quite unforgettable touch. Don’t Be Scared is an absolute revelation with Gregg Cash performing some compelling bass, while Dennis Holm drives the whole damn thing from the rear with his astonishing drum work.

The Gun is a real highlight; a force of nature that cannot be denied, as Nichols steps forward and blasts the room with a superb solo at its close. Run, on the other hand, threatens to bring the house down single-handedly before we even get there!
There are many bands who couldn’t cram as much energy as this trio did into thirty minutes throughout a full ninety and Jared James Nichols and his stage presence here fired another salvo across the bows of immensity.

Stone Broken are arguably the hottest rock act on the circuit right now. With two albums released in quick succession – their latest offering, Ain’t Always Easy already registering in the Top 15 of the mainstream charts in its first week of release – is testament to the Walsall born band’s work ethic. And their talent: where the album is exceptional, their live show is breathtaking. Kicking off with the raucous Hearbeat Away, its thumping rhythms being relentlessly hurled out by Robyn Haycock hammers home the fact these guys know how to rock!

There’s a deftness too, though. Wait For You is an acoustic joy, Rich Moss’s vocals slicing through the night with such a range and grit it’s as though he’s been born simply to sing this ballad. Then, on the other end of the scale, there’re numbers such as Let Me See It All, the eternally inspirational ear-candy that is I Believe and the out-and-out rock treat that is Doesn’t Matter.

With Chris Davies, Moss himself and bassist Kieron Conroy vying for supremacy when it comes to standing on monitors, it isn’t only their showmanship that impresses but also their musicianship. And if all this weren’t enough, Stone Broken brought along a blinding light show just to add a little bit more fruit to adorn this already lusciously rich musical cake!

The Chester Live Rooms is a fabulous space in which to watch any band perform. Yet when three diverse and ultimately superb acts as these take to the stage, the place becomes an entirely different animal and helped deliver one of the finest nights of rock to be had in a very long time indeed.

Oh yeah, did I mention that this Stone Broken show was being recorded for a live DVD? I mean, come on, how much more Bang do you want for your Buck?!