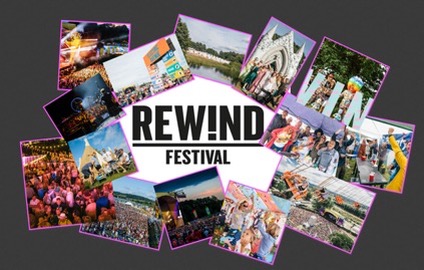 “I heard a rumour” that you can’t keep a great festival down!! We are thrilled to announce that REWIND FESTIVAL is bouncing back!! Following the Prime Minister’s step by step plan – the festival will be going ahead this year with a party planned like no other! “So, come on down and do what you’ve got to do” and make each “a night to remember.”

Especially created for the Rewind Festival, Saturday nights will close with  Jimmy Somerville’s Big Band-Tastic Boogie – a hit packed show with a massive big band with brass, strings and special effect including the world’s biggest party popper, as well as special guest Sarah Jane Morris recreating their 1986 #1 single ‘Don’t Leave Me This Way’.

Sunday night will by headlined by the legendary Wet Wet Wet, making their Rewind Festival debut.  Wet Wet Wet have sold in excess of 15 million singles and albums to date, featuring in the official UK charts for over a colossal 500 weeks and their albums have been certified 20 x platinum in the UK alone.

The REWIND festival will open with a unique show celebrating over 50 years since the formation of one of the world’s greatest rock bands – Queen.  Queen Symphonic features a full symphony orchestra, a fantastic rock band and four soloist’s from the international productions of the musical We Will Rock You performing some of Queen’s greatest hits including We Will Rock You, Bohemian Rhapsody, Radio Ga Ga, We Are The Champions, A Kind Of Magic and many more.

And if all this isn’t enough, “say hello” to especially exciting news for 2021 – the launch of The Pink Flamingo Club in the Big Top, an 80’s themed nightclub, with headline DJs Pat Sharp, Gary Davies, Mark Goodier and Bruno Brooks spinning all your favourite 80’s tunes to keep the party atmosphere going well into the night!  Each day will have celebrity DJs and live bands, kicked off each weekend with the legendary Uncle Funk & the Boogie Wonderband.

Sunday night will conclude with a fantastic firework display – what better way to end the weekend than with the skies being lit up with a stunning display.

And there’s more!!! Rewind Festival weekend is not just about who is performing on the main stage, but an event including other exciting entertainment such as Electro Picture Lounge, Silent Disco, funfair rides, kid-zone with entertainment for the little Rewinders, shops & stalls for jewelry, t-shirts, food & drink.

And if “love is all around” & you fancy tying the knot “come on and let it show” in full Rewind style in the Inflatable Church!  Yes, the big church of rubbery love is once again rockin’ 80s vibes.

And for those wanting to make a whole weekend of it there’s the general camping area – the perfect place to pitch your tent!  Or for those not wanting a night under canvas there are Campervan or caravan pitches and with shower and toilet facilities available within the campsite everything is only ever a short walk away.

You can purchase tickets now and secure all your summer 2021 festival extras such as Glamping, V.I.P, When Nature Calls, Campervans, Caravans etc. from: