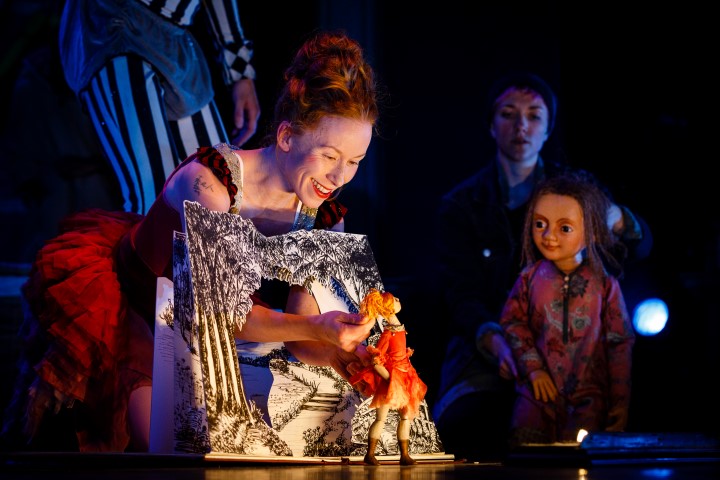 They’re complex things to reimagine, fairy tales. Get them wrong and the moral disappears in a puff of smoke. Overplay the rich hand provided by, in this case, Hans Christian Andersen and they are in danger of becoming parodies of themselves. Thank goodness then that The Bristol Old Vic and Shakespeare’s Globe have got The Little Match Girl & Other Happier Tales absolutely bang on!

Deeply dark and not a little disturbing in places, Thumbelina, The Emperor’s New Clothes and The Princess and the Pea are all recounted with a fresh edginess, mixing today’s world with that of Andersen’s own times. Not only does this work in demonstrating that not much has changed, it also adds yet more lustre and vitality to stories that glisten in their own right.

Niall Ashdown’s Ole Shuteye – the storytelling MC – is an absolute delight. Leading his charges (Us, that is) along, sometimes by the hand and sometimes by the scruff of the neck, his sheer enthusiasm, quick-witted asides and overall charm are simply wonderful in every respect. Added to this is his portrayal of the vainest of Emperors. Now this is worth seeing, for many reasons, and will have you talking well into the night!!

Never has there been a more coquettishly charming Thumbelina or a more duplicitous tailor than those conjured by Katy Owen either. Her childlike qualities brimming with zip, Owen steers events along at a cracking pace. As do both Guy Hughes and Kezrina James, as the trust obsessed prince and New Clothes narrator in particular.

The music – a sort of jazz infused funk – is played live by a superb three piece incorporating a variety of instruments from ouds to banjos, so that there is just the right amount of melancholic or joyful atmosphere created throughout. As for Edie Edmundson and her fabulous Match Girl charge, It’s is almost at times as though she were real, such is the control the artist has.

As relevant today as ever they have been, The Little Match Girl & Other Happier Tales is an absolute winner for all age groups. Packed with laughs, gasps and really affecting moments, this is a fabulous reimagining of timeless tales that simply refuse to be forgotten and quite rightly so.

A quite magical ride through time and space.

The Little Match Girl & Other Happier Tales runs until March 17