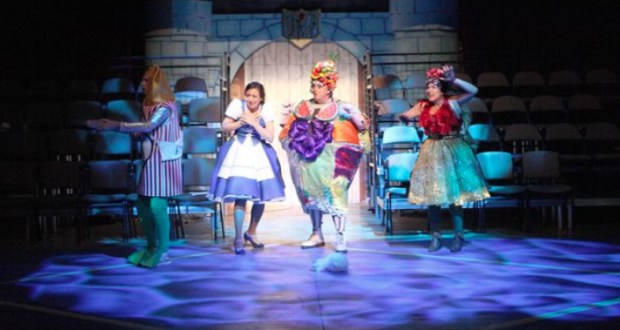 Beauty and the Beast

The Black E in Liverpool’s Rotunda

Mostly beautiful, with just a few beastly technical hitches, the community theatre company, Drops of Light’s, Christmas production of Beauty & The Beast is a selection box of the best bits of British pantomime.

Remaining faithful to the recent film, at least, but rendered into Scouse for a Liverpuddlian audience, the narrative follows the story of the bookish but bootylicious, Belle (a sweet-voiced Tori Hargreaves), daughter of Egbert Vale (geddit?), and sister to Croxteth and Toxteth. Pursued by the outwardly divine Garston, played by Ciaran Kellgren, for my money the star of the show, (brothers Fazakerley and Norris) she nevertheless snubs him, in search of someone who has inner beauty.

Meanwhile Prince John Paul George has been turned into a hairy beast by the Fairy Rose Lane, as punishment for an act of uncharitable ugliness in spurning an old lady in need. The incompetent fairy cannot reverse the spell, and time is running out. Once the rose has dropped all its petals, it’ll be game over for the Beast, who must remain as such, unless he can be saved by true love’s kiss.

Belle finds herself a prisoner in his castle, and all hopes are pinned on her falling for the Beast…

A not-for-profit company, Drops of Light was set up to provide opportunities for members of the public to gain experience in all areas of theatre production. As such, this show featured local children and students alongside professionals. What they lacked in polish, which, to be fair, wasn’t very much, they more than made up for with zinging energy.

It’s a very physical production with lots of lords a-leaping and maids, if not a –milking, then a-posturing and a-preening. Special mentions to the appalling Croxteth and Toxteth who epitomised the very essence of head-waggling, finger-jabbing Scousewives.

So, traditional story, local area jokes, high-energy dancing, what else? Oh yes, a pantomime dame (Jamie Greer) and a court jester (Adam McCoy), in an array of totally over the top costumes, from Lambanana to vending machine, a bit of light male audience member harassment, some double entendre, the obligatory water pistol action, loads of old-school audience participation and some proper song-belting from the very proficient Fairy Rose (Helen Carter.)

So, all in all, pretty much everything you could want from a panto. There were a few niggles around the microphones, which unfortunately cut out every now and then and, I’m afraid, obliterated the young narrator’s opening lines. I wonder if they couldn’t have managed without them altogether?

No matter, the verdict from my own 5 year old beastie? Fantastic!