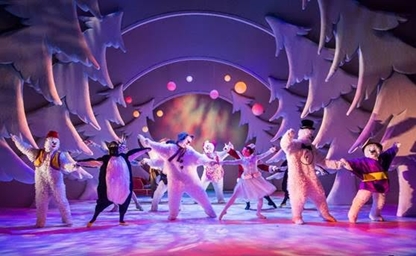 With all the magic and sparkle that Christmas brings, you’ll be walking in the air when The Birmingham Repertory Theatre production of The Snowman flies into to Opera House Manchester this Christmas, to delight young and old alike with its wonderful mix of storytelling, spectacle and magic.

The Snowman is a much-loved festive tradition. Based on the book by Raymond Briggs, the film directed by Dianne Jackson, and produced by John Coates, this stage show has now transported generations of children and their families into the wintery world of a boy and his magical snowman.

The enchanting show tells the story of a young boy’s adventures when his snowman comes miraculously to life on Christmas Eve. Featuring a dazzling array of colourful characters including dancing penguins, magical reindeer, a beautiful Snow Princess, her wicked beau Jack Frost and, of course, Father Christmas himself, The Snowman is a pre-Christmas treat for all the family and a perfect introduction to theatre and dance for the very young.

The show features a recording of the iconic song Walking in the Air in a new arrangement by Howard Blake and sung by Aled Jones duetting with his younger (recorded) self, as released on Aled’s chart topping Classic FM album, One Voice at Christmas.

First appearing as a beautifully illustrated picture book by Raymond Briggs in 1978, The Snowman subsequently inspired the classic Oscar-nominated and BAFTA award-winning animated film featuring Howard Blake’s wonderful score. It was first transmitted by Channel 4 on Christmas Eve 35 years ago.

The film’s signature song Walking in the Air reached # 3 in the UK charts when sung by then choirboy Aled Jones in 1985, and the song was voted # 2 in a poll conducted by Classic FM to find out children’s favourite pieces of classical music – beating Prokofiev’s Peter and the Wolf and Tchaikovsky’s Dance of the Sugar Plum Fairy among others.

Since its premiere at Birmingham Repertory Theatre in 1993, the live stage show of The Snowman has been seen by more than one million people worldwide, and has thrilled audiences at London’s Peacock Theatre for a record-breaking 20 years. The show has also been seen in Korea, Japan, Holland and Finland.

The Snowman comes to the Opera House Manchester, from Wednesday 8 November through to Sunday 12 November 2017 and truly is a magical tale of wonder, enchantment and charm guaranteed to get everybody who sees it ready for the full festivities of December.
Tickets are from £15 and can be ordered HERE.