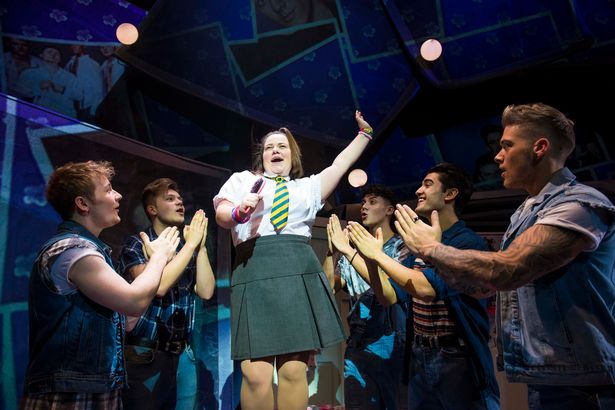 When Take That’s Gary Barlow launched his search for cast members to perform in the new musical The Band in 2017, even he, a man as used to acclaim, must have been blown away by the response the BBC show Let It Shine would generated.  6.3 million viewers tuned in to the show in its first week, with fellow judges Dannii Minogue, Amber Riley and Martin Kemp sifting through thousands of entrants dreaming of taking to the stage during the upcoming nationwide tour of the show, which its The Liverpool Empire from January 23 until February 3, 2018.

And critics of the musical have been impressed, too. Peter Robinson of The Guardian awarded 4 Stars earlier in the tour. High praise indeed! 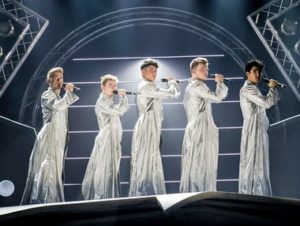 The Band is a new musical about what it’s like to grow up with a boyband, rather than being a ‘take’ on the history of Take That.  For five 16-year-old friends in 1992, ‘the band’ is everything.  25 years on, the same girls are reunited with their once school girlfriends, but now as 40-something women, as they try once more to fulfill their dream of meeting their heroes.

One actress who didn’t have to impress in front of the cameras or millions of viewers across eight weeks though was Faye Christall from Birkenhead, who landed her part through more traditional – though nonetheless challenging – means.

“I auditioned back in 2016, without knowing there was any connection with Take That at all,” Faye explained. “All they wanted then were five, sixteen-year-old girls. I auditioned, then did a few workshops so we could see how the songs gelled with the script. It was a fantastic experience and I learned such a lot. It was great meeting everyone too.”

“I kept being asked back to do more and more workshops until I finally met the other four girls I’m doing the show with now. That’s

when I sort of landed the role of younger Rachel. She’s the number one fan of The Band, and kind of wears her heart on her sleeve. Then disaster strikes one night and we get to see a whole different side to her then.”

“That’s what so exciting about playing her character. There are a lot of sides to Rachel which allows for a lot of emotion, especially as we see her twenty-five years following the events that change her life.”

When the show opens at The Liverpool Empire in January, treading those famous boards won’t be quite as daunting for Faye as it might be for others. She’s performed in the famous theatre before as an amateur actor. “I used to visit a lot of shows at The Empire growing up and it’s a fantastic place to perform. I’m really excited to be in a professional show there, although I have performed in Giselle there as an amateur while I was training in Musical Theatre. I’ve done various other dance shows and pantomimes there, too, but I’m so excited to be back this time around as a professional actress.”

“I think audiences will be very surprised and we’ve already had people saying they weren’t expecting certain things that happen in the show. I really like that. People think its a story about Take That and it really isn’t. It’s about friendship and loyalty. Hopefully, people will get in touch with friends they might not have seen for a while once they’ve seen it, which is kind of what’s happening with me in Liverpool. I have family coming and friends I’ve not seen since school so it’ll be lovely being able to catch up with them all.”

Unsurprisingly Faye is also a big fan of Take That, listening to them when she was growing up with her mum and elder sister. “The songs are really, really catchy so we’d always end up dancing around to them. When I got the job, though, you sort of listen to them differently and then you realize just how good they are. When I told my mum I’d landed the part of Rachel, she kind of lost it for a few minutes! There was lots of shrieking going on,” Faye laughed.

Faye attended Birkenhead High School for Girls, where she followed drama as part of her studies. “I knew from an early age I wanted to act. School made me realize just how much I wanted to do it as a career. I started off wanting to be in musical theatre, so being in The Band is very much a dream job. What’s really exciting though is that, with acting, different paths lead you to different places, so there’s always something new happening and no two days are ever the same. It’s the best job in the world and I can’t wait to be back on stage in my home city.”

The Band is at The Liverpool Empire Theatre January 23 – February 3. For Tickets Click HERE