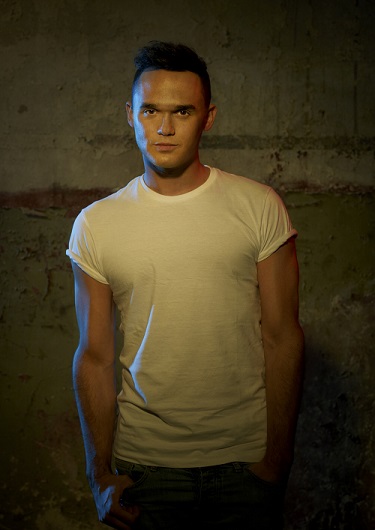 Everybody’s gettin’ Footloose at The Liverpool Royal Court Theatre as the hugely popular musical hits the Roe Street stage for the first time, Monday-to-Saturday, as a part of its critically acclaimed UK tour. The show stars 2002 Pop Idol runner up Gareth Gates alongside Maureen Nolan, and is an exciting new step for the theatre, as the former gig venue hasn’t before hosted touring productions such as Footloose before now.

However, if ever there was show tailor made for the atmosphere this theatre provides then Footloose is surely it, with its catalogue of hit songs such as Holding Out For a Hero, Let’s Hear It For the Boy and, of course, the title song which won an Oscar nomination back in 1984 for Best Original Song when performed by Kenny Loggins.

Now the show is back in Liverpool and Gareth Gates can’t wait to hit the Royal Court stage for the first time in his career.

“I’ve heard a lot about it; the theatre’s seating where people can relax and have a meal in the auditorium beforehand sounds great and I’m really excited about performing there,” Gareth said recently. “To be honest, it’s always great to get back to Liverpool. The audiences always get really into it and I’ve got quite a few friends in the city too, so it’ll be really nice to catch up with them as well. The show’s a lot of fun and this cast are amazing. With the added atmosphere that a Liverpool audience brings to any show, it’s bound to be a great night out for everybody.”

“I began my journey with Footloose back in 2015, so I’ve been involved for two years on-and-off.  The producers and I played around with a few ideas of which part would be best suited to me – there was talk of me playing Ren originally, but I’m not the best of dancers in truth – so Willard seemed the best fit. I’d never played a comedy role before so this was a big challenge. I’m usually more of the romantic lead, and this was a complete change of direction which was really exciting and, despite a bit of scepticism, it turns out I can be pretty funny!”

The late Chris Penn played Willard in the movie and Gareth watched  it again before making the part his own. “I love the film version, particularly the music, and Chris was great in it. The stage show is obviously a lot different and we attract a fabulous mix when it comes to audience members. All ages and all occasions are celebrated at the show – especially Hen Dos – so that often makes the show different at each performance. It’s a musical that reaches a very wide audience and even those who don’t necessarily go to Musical Theatre as a rule love getting involved which is great.”

As has been well documented, Gareth struggles with his speech. Not that this has prevented him from taking on major roles in other musicals such Joseph and Les Miserables. Preparation for such roles on stage takes on a whole new importance for him though.

“When I’ve learned the script, I adopt a different persona so it isn’t really an issue. The way the character moves and talks and sings

and interacts, that’s not me so I can vocalise perfectly well when being somebody else.”

“As for preparing for the physicality of the show, which is really energetic and vibrant and upbeat, I’ve had to hit the gym quite hard and generally take care of myself in order to get ready for the tour. It’s a great show to do, but it’s also quite tiring so you need to be

physically fit to do it properly.”

Alongside his singing and acting career, Gareth is also a tireless worker for charity. In December 2009 he took part in ITV’s All Star Family Fortunes and won £30,000 for The Bobby Moore Fund for bowel cancer. Other TV activities for charity have included an appearance on Sky’s Don’t Forget the Lyrics and ITV’s Mr & Mrs. again for the Bobby Moore Fund.

Gareth also carries out various events for many other organisations including The Rhys Daniels Trust and Giving Voice. He also has his own therapy venture about to start out.

“I have now also created my own stammer school which tries to help children who have similar afflictions to me and others. That begins in January and we will be offering three day courses in speech therapy.” His contribution to helping with the Rhys Daniels Trust whenever he can is just as important to him.  “I became close friends with one of the co-founders, Carmen and Barry Daniels. What happened to their two young children – Charly and Rhys – is just heartbreaking. Both contracted a rare neurological degenerative disease called Late Infantile Batten’s Disease and, ultimately, lost their battles against this horrible disease.”

“The Rhys Daniels Trust provides homes for children at specialist children’s hospitals across the UK, which enable families to stay close to their child receiving treatment for a serious or life-threatening illness. This obviously helps the children enjoy a quality of life they wouldn’t normally have, being so ill. It also means their parents and brothers and sisters can stay with them during their various treatments. They do some fabulous work and I feel really privileged to be able to help them wherever and whenever I can.”

“With regards to Giving Voice, obviously struggling with a stammer affects my everyday life. There’s been a lot of research carried out as to how a lot of young offenders get into trouble through having communication problems. The results show there’s an extremely strong link. The Giving Voice campaign aims to literally give a voice to people with speech, language and communication needs. It helps speech and language therapy services to demonstrate speech and language therapists’ unique value to national and local decision makers. It’s a charity I’m very close to and, again, I feel privileged to be able to help out.”

For further information about The Rhys Daniels Trust: Click HERE

For information about The Gareth Gates Stammer School: Click HERE