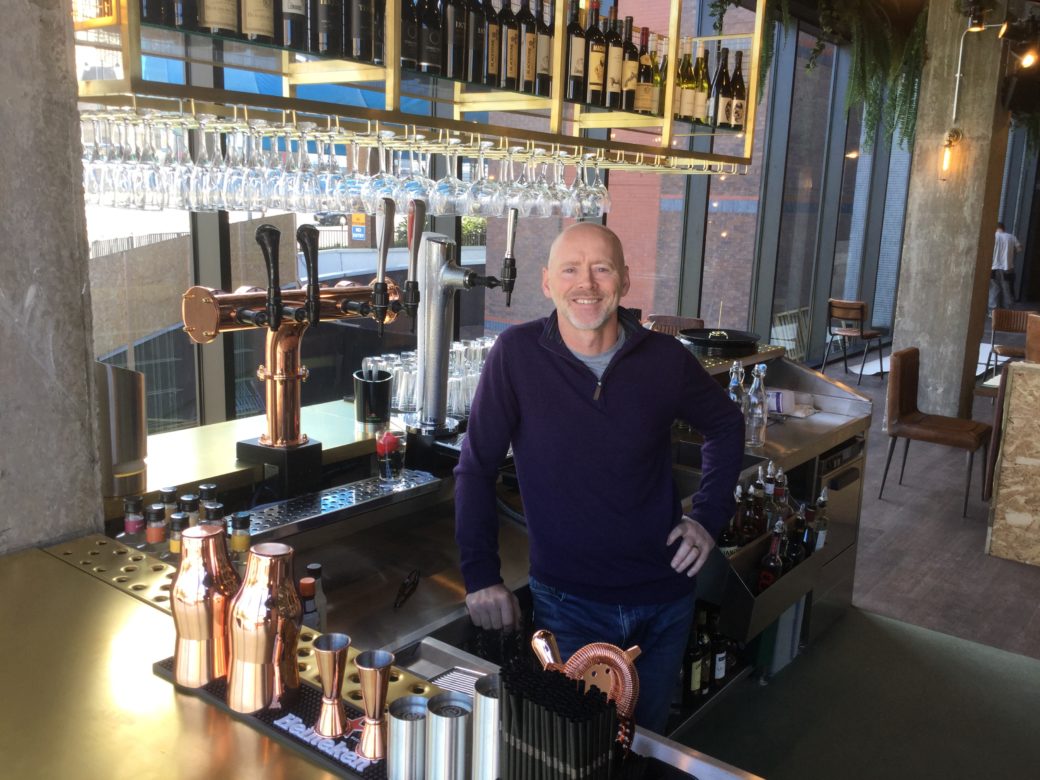 Most people in Liverpool knew the Penny Farthing pub on Lime Street for several reasons, none of them particularly flattering. Luke warm beer, the lingering smell of things unsavoury, free bacon butties and a seemingly never end line in knocked off goods being proffered by salesmen of the street.

Then, two years ago, The Royal Court Theatre bought the site (or sight if you prefer) and put in place an audacious plan not to raze the pub to the ground but, instead, to implement a radical make over.

A little over a year from when the last Penny Farthing pint was pulled, the last sarnie was swallowed and the final illicit sock was sold, the brand spanking new Courtyard Bar & Kitchen is open and ready for business.

This is latest development to have taken place on Roe Street since The Royal Court was taken over by Chief Executive Kevin Fearon and his team in 2005. Back then, the theatre itself was in a serious state of disrepair and hosting events such as middle ranking touring bands, one-off comedy nights and pantomimes in pretty uncomfortable surroundings.

Then Kevin took a punt on staging – of all things – a comedy musical drama and the place hasn’t looked back, but instead ploughed its own inexorable furrow into the Scouse consciousness. That comedy musical drama was Brick Up the Mersey Tunnels, which, since first being staged in 2007, has been seen by over 150,000 people; a quite extraordinary figure in its own right.

Add to this the innumerable other shows – and the occasional appearance in the interim by bands and artists such as Coldplay, Oasis and David Bowie – and its easy to see why the theatre is held in such esteem by the people of Liverpool and beyond.

Twelve years on, The Royal Court Theatre is arguably the most popular theatre in the city centre, with its bawdy “people-based” comedies regularly selling out. The theatre also has a burgeoning reputation for pre-show dining; the availability of a pint before, during and after the show with members of the cast and the overall “feel good” warmth the place exudes, inevitably striking a chord with audiences. 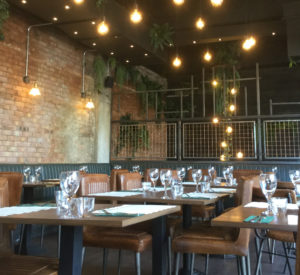 Now, with the opening up of a new bar and eatery, Kevin and his team have spotted another gap in the market, invested the time and money into plugging it and – on the face of it – developed another winner right in the heart of the city centre.

That ‘gap’ was where to go once you get off the train at Lime Street and that ‘plug’ should be The Courtyard Bar and Kitchen.

“I’m absolutely delighted that The Courtyard Bar and Kitchen is open and ready to go,” Kevin said the day after the public were allowed its first sneaky peak inside. “We’ve still got a little bit to do, but ever since we took over the theatre next door, we’ve always said this site had the potential to be – and we’ve always wanted it to be – a better place than it was.”

“The project has been ongoing for around four years. That’s when we initially spoke to St John’s about taking it over. Then new owners took on St John’s and they were a bit more inclined to our way of thinking, so said okay make us an offer … which we did.”

The push to secure the site came from the initial redevelopment of the theatre … and a sense of frustration … which itself has been radically improved throughout in the relatively short period Kevin has been in charge.

Through an architectural design competition to see who would get the task of redeveloping The Royal Court, one thing ran consistently through the photographs potential contractors for the job exhibited.

“Each shot featuring The Penny Farthing had either a police car or an ambulance parked outside, which obviously wasn’t what we wanted to promote!” Kevin laughed. “The pub was probably more famous for featuring regularly on the first series of Benefits Britain than for being on any tourist guide to the city, too, so to say it had a reputation would be understating things a little.”

“As an image when you first get off the train at Lime Street Station, it isn’t what we or the council wanted to give as a first impression of Liverpool nightlife. The decision to take the site on and redevelop it was genuinely motivated by promoting the fantastic, high quality nightlife this city has to offer to those who are not only returning to Liverpool, but also to those coming here for the first time.” 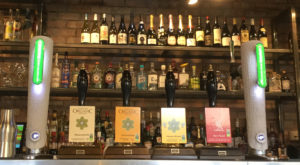 Looking out of the windows of the first floor, it is hard to imagine finer views of the bustling city centre. Side on to the magnificent St George’s Hall and looking across St John’s Lane onto the gardens behind the hall, this is a prime location that breathes culture.

It might be cliché – then again, aren’t all clichés “cliché’s” because they’re true? – but morning, noon and night, the vista is stunning!

“On top of seeing the side entrance to St George’s Hall, which with its Doric columns and arches is just magnificent, and the statues and lawns of St John’s Gardens, this place also gets the sun until late afternoon early evening. Another plus is that this road – St John’s Lane – is always, always busy so you get that sense of vibrancy all of the time, which makes it the ideal location for watching the world go by over a coffee or a beer.”

The Courtyard Bar and Kitchen is divided into two; the ground floor being a drinking bar with bar snacks on offer, while the first floor is dedicated to seated dining of up to 40 covers. A smallish area, yes, which will no doubt become busy quickly, so pre-booking is probably advisable.

“I guess what I’ve always done,” Kevin continued, “with The Royal Court and Rawhide, is to try to create places I would like to go to for 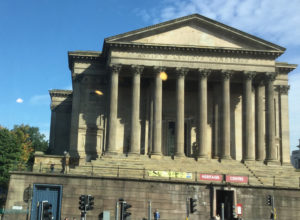 a great night out. I like superb food, a wide choice of drinks and great service. That’s the thinking behind The Courtyard Bar and Kitchen. Rather than trying to second guess what people might want, its far easier from the off to create a place that you would want to come and then want to come back to.”

For those who haven’t sampled the pre-show dining at The Royal Court Theatre – and if you haven’t, what’s stopping you? – rest assured that, no matter what you order, it will be delivered promptly and to the most exacting of standards courtesy of chef, Simon Collard.

“Simon is a veteran of fine dining in Liverpool, having worked at places like The West Tower and Blu Bar. The problem’s been that, although he loves working at The Royal Court, the chances to express himself have been limited. This new place now gives him that opportunity and I can’t tell you how excited he is that the ovens, grills and hobs are all ready to finally fire up; he’s now finally being given the freedom to be the chef he wants to be and is relishing – pardon the pun – the challenge!”

“We prospectively opened the bar to the public on 15 September and we’ve been treating it very much like the preview performances to a show; taking note of what works and what doesn’t – including the menu – and have been tweaking things here and there as we’ve been going along. The idea is to give customers what they want, how they want it and the feedback we’ve received so far has been very positive indeed. Officially though, we’ll be ready to go from September 29th.”

The one thing that stands out most about whatever The Liverpool Royal Court is involved with is that it all stands and falls on it being a real team effort. The Courtyard Bar and Grill is no different.

“Everybody has had their say,” Kevin agrees. “We had a meeting earlier and went through what the public have said about what needs improving and discussed it. Then the staff have had their say, which to me is just as important, and now we’re in the process of developing the experience of coming here. The outlook really is no different to the way in which we stage a show, simply because people are coming, either here or to the theatre, to enjoy themselves.”

“I’ve always hated being told what to do and feel that, to try to make everybody as happy as possible, each of us has to have an input into what we’re delivering. Yes somebody has to make a final decision, but only after everybody has been listened to before that final decision is made. We have great staff working within both concerns – because The Courtyard is a separate entity to the theatre – and hopefully the customers who come in will have as good a time as those who are serving them.” 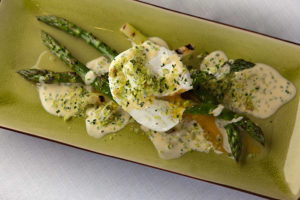 So as Act III of The Royal Court Theatre Refurbishment Project continues apace (the basement bar is being revamped and turned into a comedy / jazz / new theatre space in case you didn’t know), the renovation of the former Penny Farthing is complete … yes?

“No. Over the next two years or so there will be a further two floors added to what we have already,” Kevin said. “We’re looking to these to give us a potential rehearsal space for the Royal Court Choir and Youth Theatre, new dressing rooms and possibly space for a few of the bigger touring shows too.”

Without wishing to over egg the pudding – so to speak – there can be little question that The Courtyard Bar and Kitchen is primed to be a very popular – and very impressive – new kid on Liverpool’s culinary already impressive landscape … and a million miles away from that which was being offered by The Penny Farthing!

The Courtyard Bar and Kitchen are on Facebook HERE