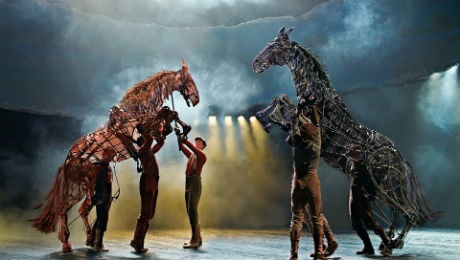 Arguably the most exciting theatrical event to be staged at The Liverpool Empire Theatre since the The Lion King took place in 2014 happens in November 2017 when The National Theatre production of War Horse comes to Liverpool for the first time. And tickets are going fast!

For those who don’t know the story, War Horse takes place at the outbreak of World War One. Joey is Albert’s beloved horse, sold to the cavalry and shipped to France. He’s soon caught up in enemy fire and fate takes him on an extraordinary, perilous and heart wrenching story serving on both sides of the conflict, whilst all the time Albert longs to find Joey and bring him home, no matter the cost.

“War Horse is the universal story of the suffering of war,” Director of Puppetry Matthew Forbes said recently. “It cannot fail to touch all those who see it.” There are 23 puppets in total, all handmade by Handspring Puppet Company based in Cape Town, South Africa.”

“We are absolutely delighted to be bringing War Horse to the Liverpool Empire Theatre,” Kash Bennett, the producer of War Horse said. “With Joey’s appearance in the city today, we hope to have brought the people of Merseyside just a small taste of the theatrical magic and artistry that Liverpool audiences can look forward to with this very special show in November.”

As well as Joey, there is also a young Joey, Topthorn and a mischievous goose. The horse puppets weigh approximately 43 kilos each with three puppeteers controlling their incredible actions. Each horse has all of a real horse’s tendons and muscles in the exact same place, to provide an astonishing realism to their movements. These are faultlessly provided by Sam Clark, Michael Taibi and Derek Arnold who took around six weeks to train for their individual roles of head, heart and hind respectively.

Liverpool’s St Georges Hall, situated opposite the Empire Theatre on Lime Street, played a significant part in the First World War. On 31 August 1914, a month after the War broke out, the plateau outside this iconic Liverpool landmark was packed with thousands of men queuing to sign up to the military. By 10am, the first 1,000 men had been recruited, and by September 1914, more than 30,000 enlisted at St George’s Hall. Thousands again gathered at St George’s at the end of the War, clambering on the lampposts in “celebration”.

Michael Morpurgo has been quick in his admiration for those who followed Liverpool’s lead. “After a few months rest, out at pasture, Joey, the War Horse and his great team from the National Theatre, will be touring the UK again, from 2017 through to 2018 and the centenary of the end of the First World War.”

“This will be Joey’s first stay in Liverpool, a very important city in the history of that most tragic of conflicts. I am so pleased The National Theatre will be taking their show all over the country, to towns and cities, many of them places War Horse has not been seen before; that so many more people will have the chance to enjoy this unique theatrical event.”

War Horse ran for eight successful years in London, and has been seen by over 7 million people worldwide since its premiere at the National Theatre in 2007, with record breaking runs on Broadway, Canada, Australia, the Netherlands, Belgium, South Africa and most recently China. It has won 25 awards including the Tony Award for Best Play on Broadway.

“We’re delighted to play host to this iconic, critically-acclaimed production on its first ever visit to the city,” Diane Belding, the General Manager of the Liverpool Empire Theatre said. “We’re sure that the people of the area will take this extraordinary play – and Joey – to their hearts.”