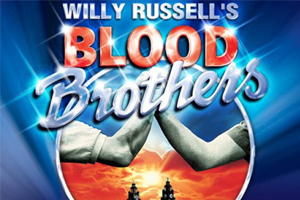 If you are going to make your debut at a new theatre, then make the show a classic. Blood Brothers is at The Storyhouse in Chester this week and, believe me, this setting is every bit as magnificent for watching theatre as this timeless musical drama.

With its two tier auditorium and state-of-the-art fittings, lights and stage The Storyhouse can rival any in the country and in hosting this perennial favourite – one of the few you can watch again and again – is an absolute joy.

The production itself isn’t half bad either. Lyn Paul is once gain the tired, sad luckless Mrs. Johnstone. A woman so poor she has to give up one of her twin sons for adoption while charring for the rich, childless Mrs Lyons.

Lyn Paul is outstanding. Donning the pinny and the labours of Mrs. J like a shroud for the vast majority of the show, her voice rings with clarity and strength, while her manner dutifully shifts from bereft to caring and back again with immaculate timing. Marilyn Monroe may be the most often sung refrain, but Easy Terms and the story’s show stopper Tell Me It’s Not True have rarely if ever been better performed.

Sarah Jane Buckley’s troubled Mrs Lyons is equally as superb, with her her version of My Child seeping with desperation at every turn. It is the unnerving quality of Mrs. Lyons’ instability that really shines here though, proving if it were necessary that money and status count for nothing when measured against happiness.

Sean Jones’ angst filled Mickey – intent on keeping on the right side of fate despite the odds being stacked against him – and Mark Hutchinson as Eddie bounce off each other like boxers from the ropes of a ring. Each brings a little something extra to their role, but it is Jones when Mickey is at his lowest ebb that will live long in the memory.

As Linda, the girl caught between the two friends, understudy Alison Crawford surely deserves a leading role for herself sooner rather than later. Confident, assured and bubbling with optimism, Crawford typifies the never say die attitude her role demands and manages to take it to a new level.

Yet as good as these performances are, it will be a long while before we see a Narrator as silkily malevolent as that provided by Dean Chisnall. His brooding menace is as dark as the heart of Mrs Lyons, yet Chisnall still manages to imbue him with enough caring to make us care alongside all of his prophesying of doom.

The set seems to have grown in impressiveness down the years, whereas the music performed by the live band is as always superb. And thanks to the acoustics, not a beat or word is missed throughout.

If you are going to make your debut at a new theatre, then make the show a classic. Blood Brothers is unquestionably such a show and The Storyhouse in Chester is a more than fitting stage upon which to play it out.