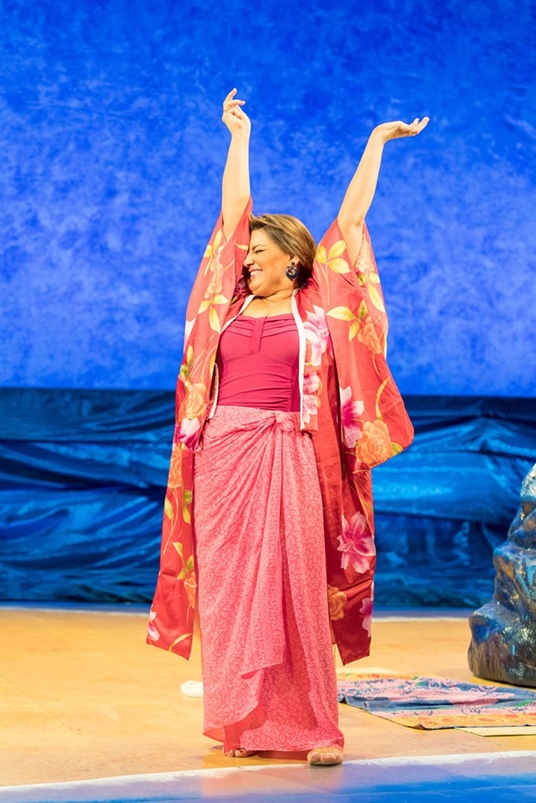 Shirley Valentine, which is running at The New Brighton Floral Pavilion until Saturday, never loses its charm. Rich, sad, funny, poignant, sympathetic, empathetic, touching, warm and superbly acted, Shirley Valentine is back home on the banks of the Mersey with Jodie Prenger given the honour of celebrating the 30th anniversary.

Feeling trapped in a world of domesticity, Shirley, a housewife from Liverpool, needs a change in her life before she has another conversation with the walls. When her friend Jane invites Shirley on a trip to a Greek island, the disillusioned housewife jumps at the chance but even before the plane lands, Jane ditches Shirley for a fling, which means Shirley is left to her own devices.

Witty and drawing in the audience with her own and Shirley’s warmth and vitality,  Ms. Prenger delivers a master class in physical theatre. If there is a quibble it is that the Scouse accent of this proud Lancastrian wobbles in and out so that the peripheral characters – those of Jane, Margery and Gillian in particular – have a little more weight to their consistency. Still even with this said, the Northern grit and irrepressible humour glitters.

In the expert hands of director Glen Walford, the magical words, astute observations and deliciously crafted actions and interactions created by Willy Russell have been harnessed and polished even more. This makes the whole two hours not only whizz past, but also provides a sense of this being more a debut production rather than a play that has been delighting all those who have seen it for three decades. In no small measure this freshness is down to Jodie Prenger’s supreme ability to engage.

Mention should also be made of the twin scene set which further transports us effortlessly from Shirley’s kitchen and out – along with  her battered suitcase, passport, money and newly acquired silk robe – to lands afar and sunny.

Shirley Valentine is back home on the banks of the Mersey, celebrating her 30th anniversary and waiting to tell you all about her adventures. Be sure not to miss her.