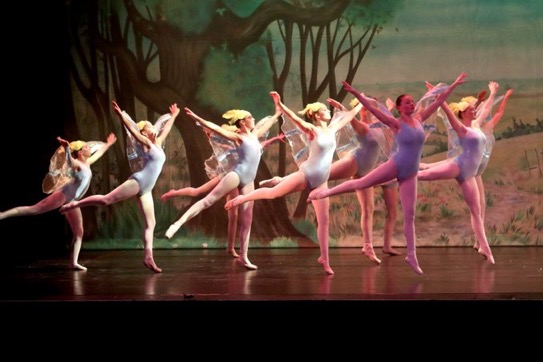 The Lion, The Witch and The Wardrobe

“Always winter but never Christmas.” Not so for the Liverpool Empire Youth Ballet’s production of The Lion, the Witch and The Wardrobe, where all our Christmases came at once. Polished, playful, professional… it was the perfect gift-wrapped treat.

Four children are evacuated to the country during the Blitz, where they are accommodated in the house of a professor. Playing hide and seek one day, the youngest, Lucy (Hannah Scott), climbs into a wardrobe and stumbles into the snowy world of Narnia, where she meets a friendly faun, Mr Tumnus (Jamil Abbasi).

Returning through the wardrobe she runs to tell her siblings that she’s back. To be greeted with confusion – she’s been gone no time at all, and they think she is just telling a fantastic story. Later, her brother Edmund (George Edwards) also visits Narnia, where he encounters the White Witch (Caitlin Hanlon) and, with the help of some Turkish Delight, falls under her enchantment. Lucy is thrilled that Edmund is now able to corroborate her story of a magical kingdom accessed through a wardrobe but her brother denies all knowledge of Narnia to their older brother and sister.

Finally, all four siblings make it into Narnia, a land of snow and ice, held in a perpetual winter by the wicked White Witch. Anyone who thwarts her is turned to stone, and the only hope is that Aslan, a fair but fearsome lion, will return to defeat her and liberate the unicorns and beavers of Narnia.

Much is made of the religious overtones of CS Lewis’s most famous work, and certainly there are recognisable Christian tropes to be found, not least in the figure of Aslan, who sacrifices his own life to save Edmund’s. But the beginning of the ballet, where people are depicted taking cover from German planes and children are being evacuated, roots the story very firmly in a universe where good must fight evil, and in those terms, it’s just like any other adventure story.

And the children of the Youth Ballet bring it to life beautifully. From the depiction of the bumpy train ride, where dancers joggle in their seats to the sway of the journey, to Mr Tumnus’ twirling umbrella echoing the action of the swirling snowflakes and the White Witch’s frenzied assault on the bound and humbled Aslan.

And if their motion is wonderful, so too is their immobility, as seen in the scene in the garden at the Witch’s castle where the statuary are made up of dissidents who’ve been petrified and a number of the troupe stand frozen in attitudes of supplication and surprise for very many arm-aching minutes.

The whole show is bound together by music that is both lush and insistent, from the syncopated rhythm of the train to the reedy pipes of Mr Tumnus’ soundtrack. And the set is simple but enchanting. The effective device of enveloping the audience in a snowstorm of light allows scenery changes to be made without closing the curtains.

There’s only one small sticking point in the form of Aslan. A slight titter arose at his entrance, when he appears looking a little like Dougal from the Magic Roundabout in a Chinese New Year parade, with a great big head and pantomime horse body. But I’m not really sure how they could have improved on that without losing the sense of stature and reducing Aslan to mere symbol. And he certainly gave a mighty roar.

Almost as big as the cheer from the audience. Director and choreographer Lauren Taylor should be very proud of her production and her young stars.