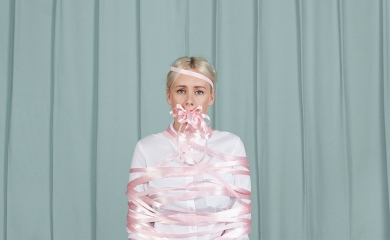 A Pacifist’s Guide to the War on Cancer is all of these things. It is also an honest, warts – or maybe that should be tumours – and all depiction of what it is like in the twenty-first century, to live with a disease that will touch so many of us, directly or indirectly, every minute of every day.

This is why this production is important. It doesn’t shy away from cancer’s vileness, it takes it head on and if, like many, you are or have been directly or indirectly involved with it, then this is something you simply must see if you can.

In writing this, I hesitate to say play so will say ‘guide’ as the title suggests, Bryony Kimmings has taken a huge step in destigmatising a taboo in an often humorous manner. Yet it should also be said, this not a comfortable watch. How could it possibly be so? Cancer is brutal, hence the word war and similar language used in describing it and defeating its brutality.

Lara Veitch has cancer. Has had it six times. The first being before she was even born. Lara Veitch is on stage almost entirely throughout, physically recounting her experiences in the Kingdom of the Sick and, also, The Kingdom of the Well. She is a normal woman. One who laughs at herself and others who call her ‘brave’. Who gets angry, afraid and lonely. A woman who needs a hug. A woman who needs to go out and get wrecked from time-to-time.

She is nobody particularly special, she says, except she is. She has chosen not to hide away, to keep her illness secret. She has decided to ‘enlighten’, ‘inform’, ‘engage’ and ‘stimulate debate’. She may not be ‘brave’. She is, however, remarkable. In her own way, as we all are, I guess, she is unique.

To single out any of the cast individually would, by its nature, bring a hierarchy of performance to the ensemble. Here it can’t be done. Suffice to say that each play their own parts with compassion, empathy and a degree of clarity that can only have been indescribably difficult and, for that, they deserve all the plaudits that are surely headed their way.

A Pacifist’s Guide to the War on Cancer takes place at The Liverpool Playhouse. A theatre, yes, so a more fitting – more appropriate – place than this to demonstrate those twin aspects that make performance art so especially powerful – life and death themselves – is pretty much unimaginable and a huge well done and thank you is owed to all concerned in bringing it here.

Theatre is supposed to be all of the things listed above. With A Pacifist’s Guide to the War on Cancer all the boxes are ticked and more than a few are added. Could anything more than this be asked of any production on any stage, anywhere?

A Pacifist’s Guide to the War on Cancer is at The Liverpool Playhouse until February 3. For Tickets Click HERE