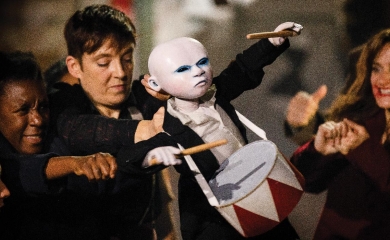 The last time Knee High were in town they delivered a dripping great slice of surrealism with Dead Dog in a Suitcase. This time, with their adaptation of Gunter Grass’ The Tin Drum, the Cornwall based company have gone the whole hog and delivered the whole, freshly baked pizza topped with lashings of fantasy and more than a soupçon of brilliance.

Steeped in metaphors as to how the good people of Germany fell beneath the evil rise of Nazism, this is a tale that still resonates, particularly with the rise of dictatorships unseen or unrecognised as such.

Yet with this said, this is also a musical play that isn’t in any way “preachy” but is instead as much fun as it is thought provoking. This is in no small part thanks to Mike Shepherd’s magisterial directing prowess, the fantastic cast, deliciousness of the lighting, a set and props that deserve their own round of applause, music that is as exquisite as it is haunting and a puppet that is just plain freaky!

In short, to say that this production of The Tin Drum is unlike any other you will have or, indeed, will ever see, is testament to the superbly executed outlandishness of it all. Think Chucky meets Tommy and you’ll still only be half way there.

Not so much a play, drama or musical but more an absorbing and at times mind bogglingly bizarre theatrically masterful bout of brilliance, The Tin Drum will unquestionably have you talking about it all the way home and that, surely, can only be a good thing. Right?