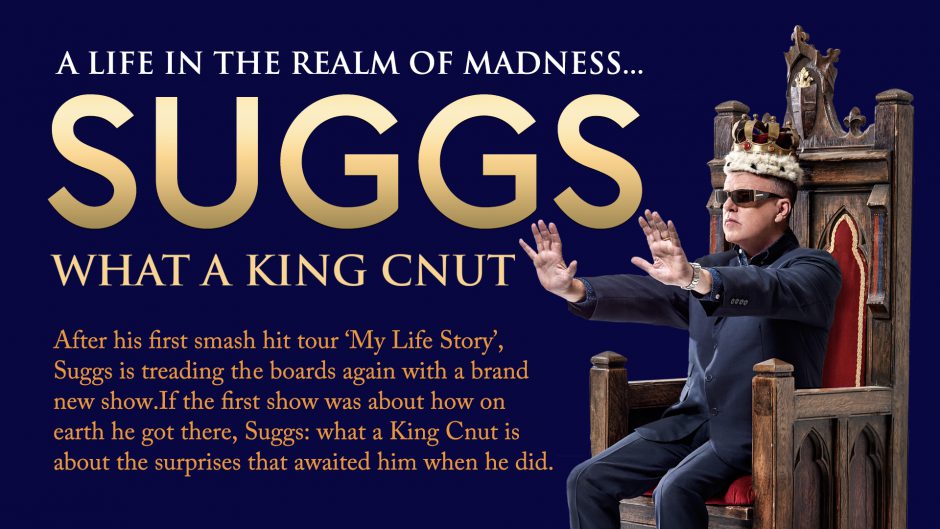 Suggs – What a King Cnut: My Life in the Realm of Madness

Walking into the theatre last night, one thing was clear: there’d be no Ska dancing to “One Step Beyond.” A grand piano, a throne and three spotlights made up the simple stage set.  “Well the stories had better be good” I thought to myself, two hours later I left thinking they weren’t good, they were brilliant.

What a King Cnut, A Life In The Realm Of Madness is a two hour show full of great stories; some funny, some sad and some just ripped poor Brian May to bits. Suggs is a natural raconteur with great comic timing. The night begins with a short story about King Cnut, with the Madness frontman dressed in a white Mac, sunglasses and a dodgy long black wig accompanied by keyboardist Dean ( Deano) Mumford.

The night has a wonderful intimacy with the stories ranging from snorting cats, gatecrashing the Groucho Club with Bono and President Clinton and several hysterical tales involving Brian May and his trademark hairdo.

It’s not all fun as Suggs reveals when his Mother asked if he would help to find his adopted sister. We were treated to a few abridged Madness favourites in between the stories.

Altogether it was a brilliant night and, after two hours non stop talking, you’d think Suggs would have confessed all. However something tells me that after an unbelievable forty years in the music business, he’s got many more anecdotes to share.

As a big Queen fan myself if he promises to leave Brian alone I’ll be back for more.