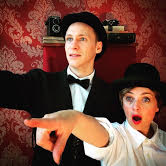 Sir Arthur Conan Doyle’s classic mystery, The Hound of the Baskervilles is brilliantly bought to life on stage in Northern Rep’s hilarious and critically acclaimed production on Wednesday November 1 at Liverpool’s Epstein Theatre.

Northern Rep – which is owned by everyone who is a part of it – is dedicated to creating a sustainable independent theatre scene in Manchester. They aim to provide opportunities for emerging theatre makers to make their mark and work very hard to make sure their work is affordable to as many people as possible.

Thomas Moore, Artistic Director of Northern Rep, said: “We are so excited to take this show on the road to Liverpool. We’ve had such a great time bringing this show to Manchester audiences for the past three and a half months. We never expected that it would be as loved as it is. In classic Holmes & Watson style, expect a riotous night filled with intrigue and excitement,”

Theatre manager, Rebekah Pichilingi, said: “We are delighted to welcome Northern Rep to the Epstein Theatre in November. The Hound of The Baskervilles is such a classic tale and I’m certain our audiences will love this reimagined version which has been receiving such high acclaim and reviews!”

The Hound of the Baskervilles, by Sir Arthur Conan Doyle is adapted and directed by Thomas Moore, and performed and produced by Northern Rep.

The Hound Of The Baskerville’s