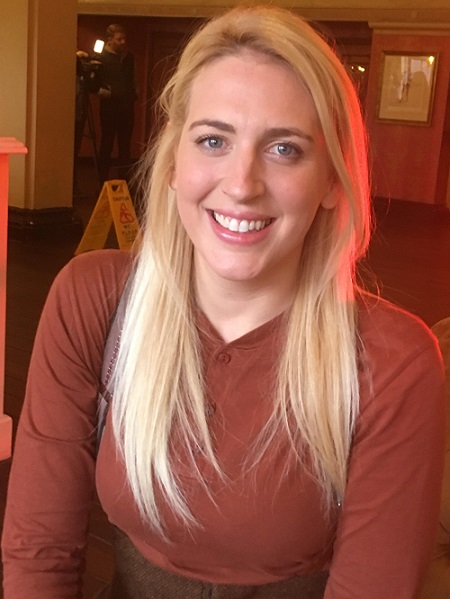 With War Horse entering the final furlong of its run at The Liverpool Empire, for one of the integral cast members the visit to Liverpool has been something of a homecoming of its own. Nicky Cross, who is from Oxton in Birkenhead, plays the inside hind quarters of Joey in The National Theatre production of Michael Morpurgo’s novel. “My parents are still in Oxton Village and I went to Birkenhead High School, so this part of the tour is one that I’ve been particularly looking forward to for a while now,” Nicky explained. 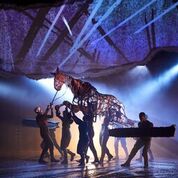 “I’ve been a regular visitor to The Empire growing up, both on school trips and with the family. In fact I came over the river quite a lot to go to all the Liverpool theatre shows, so I’ve been lucky in having so many quality theatres to visit. It’s probably where the bug bit, with me siting in the Stalls thinking ‘one day … fingers crossed’, and now here I am in War Horse with The National Theatre.”

Nicky trained at Mountview Academy of Theatre Arts having completed her degree in Drama at University of Birmingham. As well as studying, though, Nicky spent a lot time dedicated to high level sports and is a qualified fitness instructor and personal trainer. Attributes to have proved more than useful when it comes to manoeuvring Joey around stage for over two hours per night.

“When I first saw War Horse at The National Theatre, even before I went to drama school, I thought it might be a part I’d be able to play not only because of the physicality, but also you need to be a certain height, 5’ 8”, and be strong enough to do it as well. It had been something of a male dominated role for those reasons but then I came along. I always had that challenge in my head, though, and knew it was something I could do and really wanted to do for a long time.”

“Both Joey and Topthorn are big horses and we’re cleverly cast in our teams to slightly descend in height. The head will be the tallest team member, gradually going downwards to me at the back. This obviously means you need to be strong enough to lift the puppet and do so with a person sitting on top of you sometimes as well,” Nicky laughed.

Although Nicky went to see the show at The National Theatre in London, she has never seen the Steven Spielberg movie, which was made within eighteen months of one of his producers seeing the show in London and phoning him immediately afterwards.

“I saw the play and that blew my mind, but the film never really appealed as much. What I love about the play is how they manage to bring the animals to life through puppetry, whereas obviously they use real animals in the movie. Then, when I got the job, I thought about watching it but then really didn’t want anything to influence what I might bring to it. So, although I still haven’t watched it yet, I’m pretty sure at some point I will sit down and do so.”

As with any acting role, Nicky has to inhabit her character so as to be able to make it convincing. “Although we’re puppeteers in the

show, we all see ourselves as actors,” Nicky said. “It’s a non-verbal acting role, which means we have to communicate through breath, movement, sounds and also as a unit of three. Essentially though we’re still all playing Joey who just happens to be a horse. We respond to emotion and feeling, rather than text; to what they actors are giving us in their tone of voice and their actions. Pretty much as a real horse would do, its important we remember not to respond to what someone’s saying but rather more to how they’re saying it.”

“I think as actors we have to believe that Joey and Topthorn are real horses. As the puppeteers we have to believe, but what’s really amazing is how the other actors invest in both the puppeteers and the puppets themselves. Thomas Dennis and Peter Becker, for instance, doing such fantastic jobs in believing the horses are real when playing Albert and Friedrich, in turn make the audience believe the horse is real too. They’re the fourth puppeteers of the show inasmuch as they manipulate them as much as we do. That’s one of the most beautiful things about the show: that the actors invest in creating the belief the horses are real so the audiences can believe the hoses are real.”

One thing that is surprising, given the amount of running around on stage that takes place – and the dexterity needed by Nick and her colleagues to get around without stumbling – is that the stage itself is incredibly rough. “Yes, we’ve nearly had one or two slight mishaps but nothing major, which is amazing considering the big, heavy boots we have to wear. The stage is designed like that to resemble the fields of the front line. It’s also a bit of a chameleon in that whichever scene we’re playing – out in the farm fields or in the grounds of the Belgian mansion – it adapts itself beautifully. What you might find surprising though is that, despite it being quite bumpy, its also quite comfortable. Joey and me love rolling around on it,” Nicky laughed. 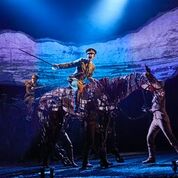 “In all – the lights, the sets, the costumes, the music, the effects and of course the puppets and the actors – everything combines to make War Horse a true visual masterpiece. When I first saw it I hadn’t seen anything like it before and I still haven’t. It is something so complete as far as taking you on the famed emotional journey is concerned, it may never be done in this way again. With it being in Liverpool, too, there’s an added poignancy given the city and the region’s enormous contribution to The First World War.”

On November 12th this year, to mark Armistice Day in the hundredth commemorative year of the devastation wrought by the Battle of Ypres, Joey made an appearance at the Cenotaph outside of St George’s Hall. A poignant reminder that sadly Nicky missed. “I’ve seen lots of clips on social media,” Nicky explained, “but unfortunately I had to miss the event. Joey makes lots of public appearances wherever we go: people love seeing him do his thing and showing off. The remembrance service would have been lovely and looked to be a really, really special moment. Armistice Day is always a special time to be performing War Horse: next year will be the centenary of the end of The Great War and we’ll still be touring. We all have someone connected to World War I in some way, but the tale of Albert and Joey of Joey transcends other wars too, which is what makes it such a great story.”

War Horse is at The Liverpool Empire until Saturday December 2 then touring across the UK.