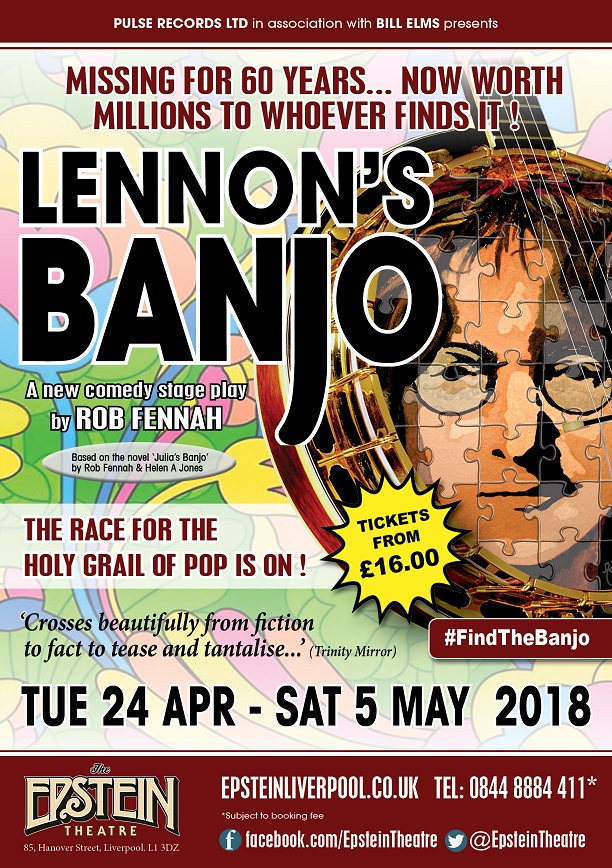 Back in 2004, I sat down with writer and musician Rob Fennah of Pulse Records Limited to discuss the then new project of turning Helen Forrester’s Twopence To Cross The Mersey into the acclaimed musical it went on to become.

Once the ‘official’ bit had been concluded, Rob confided that he had another project in mind too. Something about John Lennon’s mum, Julia, teaching The Beatles legend how to play rock‘n’roll on her banjo; an instrument now lost but highly sought after by Beatles Buffs the world over.

A ‘Holy Grail’ of rock memorabilia, if you will; an object of near Arthurian purport.

Move forward to 2013 and I’m interviewing Rob again, this time about the publication of a novel both he and Helen A. Jones have written called Julia’s Banjo. A tale of how a Beatles tour guide finds a clue to the possible whereabouts of the said banjo… and its estimated monetary worth: £5,000,000. However, a Texan dealer has got wind of this information and is hell bent on grabbing the instrument by the fretboard and making a dash for the cash.

Now Rob and I are together again, though not to chat about Julia’s Banjo but Lennon’s Banjo, his new comedy-drama which is set to open, somewhat ironically, at The Epstein Theatre on April 24, featuring (for some performances) a real life Beatle!

So, fourteen years on from that initial conversation, Rob’s idea of there being a mystical musical manifestation as yet to be unearthed is to finally be put in front of a living, breathing audience in much the same way as he originally intended.

“It’s a relief to get it on stage, yes, but if we take it all the way back, the original idea was for it to be a screenplay for either film or television,” the former Buster rhythm guitarist explained. “There were a lot of filmy people interested too, but then came the big recession of 2009 and all the cash dried up. That’s when Helen and I decided to write the novel, as a sort of stop gap. The book got some really good reviews and kept the idea of a film adaptation of Julia’s Banjo very much alive.”

“Over the years since its publication lots of people were asking: ‘whatever happened to that film idea?’ So a couple of years ago, I decided to adapt the novel myself into a stage play, another stepping stone if you like towards the making of a feature film. I changed the name to Lennon’s Banjo to appeal to a wider audience, but otherwise kept the structure of the story the same.”

“In this stage production, we have eight actors playing twenty odd parts, so it’s a pretty big deal. And with it also being a brand new play, myself and co-producer, Bill Elms, have put our heads on the block in order to get it on. But because the story is such a fascinating one and weaved around real historical events, we feel it’s a risk well worth 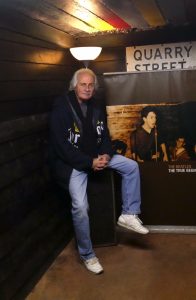 taking. We’re confident people are going to leave the theatre intrigued by the very real possibility that somewhere out there, probably in Liverpool, perhaps in their own attic, is a banjo worth five million quid!”

So, it may have been a long and winding road to get there, something of a mystery tour in its own right, but perseverance very often pays off and there’s a huge cast joining the bus too. “We’ve got a lot of familiar faces like Mark Moraghan, Eric Potts and Jake Abraham. Then there’s Lynn Francis, Stephanie Dooley, Danny O’Brien, Roy Carruthers and Alan Stocks. And the icing on the cake has been to get Pete Best involved.”

“How that happened was by virtue of the fact he really liked the book. When the idea for the play came about, I took it upon myself to ask him whether he could do something and he said yes, wow!”

“What Pete particularly liked was the accuracy of the historical facts within the novel. We didn’t stint on the research for the book and it paid off, now having a real-life Beatle giving it the thumbs up.”

“Set in present day Liverpool, Pete Best will be playing himself; but only for three performances due to other commitments. Alan Stocks will be playing the part on other occasions. I have to say though, the rest of the cast are getting a real kick out of being on stage with an original Beatle! Pete’s such an integral part of the group’s history, with thirteen of the songs he played on, such as Love Me Do and PS: I Love You, all featuring on the Beatles Anthology. He’s very much a part of the band’s story and it’s a real pleasure to have Pete involved. I’m sure audiences will be very excited about it too.”

Rob Fennah is no stranger to adapting novels into successful scripts. A skill in itself that is much harder than one might imagine. “I found it challenging with Twopence, but when it’s your own novel, and you are so close to the characters you have created, it’s really tricky deciding what parts to cut out. But the parameters of a stage play dictate that you just can’t have everything in there. You have to be ruthless, cut what needs to be cut and keep the story moving forward.” 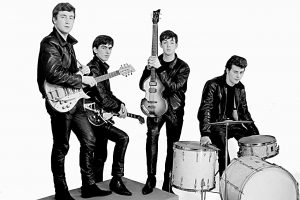 “I’m a big fan of action in plays. I’m not one for long, drawn out monologues as a vehicle for moving a story along. I like plays that are more like films. Quick and fast paced. If something’s not driving the story along, then why have it in? You can’t have the audience wandering off blindly down a path which leads nowhere. You have to keep focused on telling the story at hand and you don’t have time or room to add too many subplots or musings from characters. It has to be pretty much watertight in that respect.”

And having adapted Twopence To Cross The Mersey into both a successful musical play and a straight drama, Rob is keen to establish that Lennon’s Banjo is definitely not a musical, despite its John Lennon overtone.

“Although I’m a musician by trade, I’m not a huge fan of modern musicals. Many of them are just gigs with talking in between. To me, a musical is something Andrew Lloyd Webber would write; the songs telling the story throughout. Even Twopence wasn’t a musical in the traditional sense. I referred to it as a ‘musical play’, a straight drama with songs added to reflect mood rather than continue with the dialogue. Lennon’s Banjo, though, is a comedy drama, so there isn’t going to be anybody breaking into song at the drop of a Stetson or anything like that.”

This is a busy year for Rob. While Lennon’s Banjo is opening later this month, on October 2nd another Fennah adaptation of a Helen Forrester best-seller, By The Waters Of Liverpool, is premiering at The Liverpool Empire, again as a straight drama.

“We’re going back to where it all began with Twopence, which did phenomenally well

for us at The Empire. It was fantastic to be asked to stage the sequel there as well. The Liverpool Empire Theatre is where we all aspire to be, either as a writer or a performer. If you have your name on a poster outside that place, then you can be pretty sure you’re doing something right. It’s a real beacon for me personally.”

So with the sun breaking through the clouds to shine across the Albert Dock, there’s time for the closing question: what can an audience expect from Lennon’s Banjo? “It’s a romp through Beatledom. The Beatles meet the Da Vinci Code. And when you put Texans alongside Scousers you can’t help but laugh.”

“It’s not so much gag driven, but funny because of the situations the characters find themselves in. And most of our characters have a real-life counterpart out there. These people and places are very real so audiences will be able to relate far more easily to what’s going on and have more than a few laughs along the way. It’s going to be great.”

Lennon’s Banjo runs at The Epstein Theatre, Liverpool April 24 – May 5