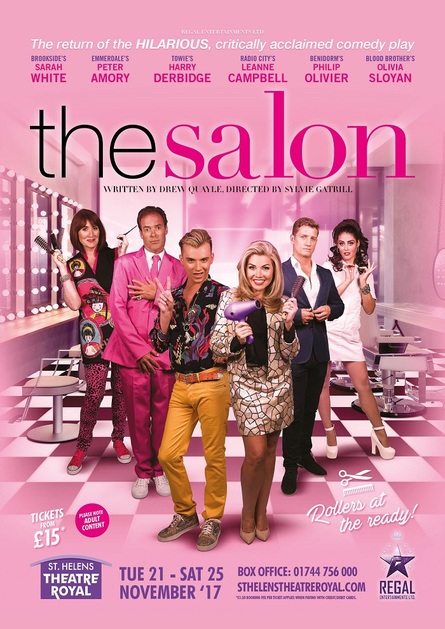 One of the most requested shows to have been produced on Merseyside is finally making a return to The Theatre Royal in St Helens this week. Drew Quayle’s The Salon opens on Tuesday November 21 and runs until Saturday November 25. The show stars Radio City breakfast host Leanne Campbell and former Emmerdale baddie Peter Amory. Also appearing are former Brookside stars Sarah White and Philip Olivier and TOWIE favourite Harry Derbridge.

For those that want perfect nails, a relaxing massage or a perfect perm then there are plenty of places to go, but for jealousy, bitchiness and gossip look no further than ‘Curl Up and Dye’. Carol wants to find true love, Tia wants to be a pop star and Sheila just wants a toy boy. Mix in a camp-as-Christmas boss, a plastic gangster who is trying to take over the salon, a hysterical drama queen, and a whole lot of vodka, and it all adds up to a brilliantly funny night out. Here Drew takes time out for a chat.

It’s been 7 years since The Salon was at The Liverpool Royal Court in its last outing and 8 since it opened The Theatre Royal St Helens. Good to be back?

Yes, I’m looking forward to seeing the show from a new perspective. As you say a number of years have passed since the show was last produced and I feel I can watch it now, possibly for the first time, as a member of the audience.

The development of the story took awhile. Where did it spring from originally?

My aim from the start was to write a good fun night out, with the onus on a female audience. I began with the three principal female characters before I found a suitable venue to place them in. To set the play in salon, once that choice was made, seemed the obvious one as I toyed with the interaction between the girls. Before I’d got half way through the script, however, I was asked to write another play and put the Salon on hold for a time. As a consequence the First Act was written a whole year before I found time to begin the second.

The characters are all quite big and bold. Were each of them how you originally intended and does having big names in the cast add any extra pressure to you as a writer?

The characters were always intended to be larger than life. In fact that is part of the joke. A joke the characters are often in on themselves. As to the cast, I think it adds more pressure only if it was a new play. As it is, I’m excited by the casting.

How involved are you with the process of putting on the show?

This time round I’ve been completely hands off. The production is totally the Theatre Royal St Helens baby. But I believe the show’s in very good hands. They have a great track record with comedy.

I think the last production of one of your plays was Last Train to Yuma? How did that go when it was put on at The Lantern?

I also directed the play that time and it was a great experience. I had a wonderful cast and the show received a great reception. I learnt a lot on that show.

What are the prospects for a writer like with regards to having a show staged in today’s climate? Any advice?

It’s always difficult getting your first show produced professionally. I’d advice any writer to put the show on themselves if they can’t sell it straight away. The worst that can happen is you’ll learn a hell of a lot. Its only when you see your work performed that you truly develop as a writer. Even if it’s a total DIY production.

You have had sketches performed by the likes of Hale &Pace.  What got you into writing in the first place and how did it feel to see your work on TV at the time?

I had a sketch about multi-flavoured condoms that people who saw it reminded me of for years. It wasn’t that funny; which is what they reminded me. But the first time I saw my work on TV is was a buzz, no doubt about that. I think the reason I started writing is that I like to entertain people. I can’t act, can’t sing, people tell me I can’t dance, and I once famously scored a hat-trick of own goals in one match, so football was out. Writing was the only thing left.

So, which is the play you most wish had the name ‘Drew Quayle’ attached to it and why?

Pretty much without doubt I’d say A Streetcar Named Desire, which is actually written by the great Tennessee Williams . In my opinion, and outside of Shakespeare, it’s the most lyrically beautiful play ever written.

What can an audience expect from The Salon?

A good fun night out with plenty of laughs. The Salon is pure escapism but with a deeper story running through underneath all the mayhem.

Drew Quayle’s The Salon is at The Theatre Royal St Helens from November 21 – November 25. You can get your tickets HERE!