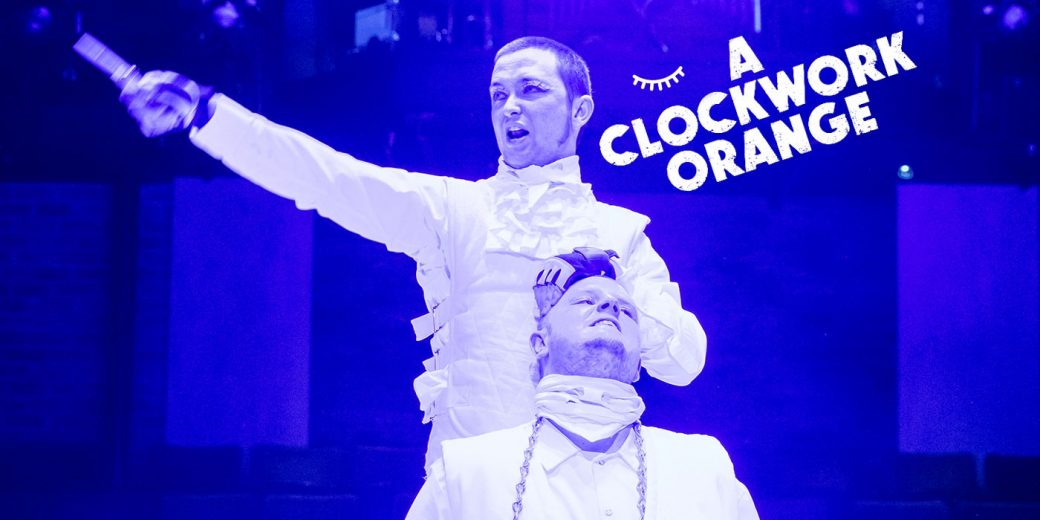 Music: Anthony Burgess based on Beethoven, and arranged by James Fortune and Peter Mitchell

Nick Bagnell’s new production of Anthony Burgess’ most famous novel, A Clockwork Orange, at Liverpool’s Everyman is real horrorshow, my droogs, real horrorshow. In both senses.

Majoring on ultra-violence as the story does, “horrorshow” is also used as the highest accolade by the nasty, thuggish Little Alex, the main protagonist, whose Saturday night thrills run to rape, assault and even murder. All of which is portrayed excrutiatingly graphically, with blood and convincingly choreographed gut-kicking, yet weirdly distanced from the audience by Burgess’ own music-hall accompaniment and the soaring passages of Beethoven.

Because, for all his predilection for a punch-up, Alex likes nothing better than a bit of “Lovely Ludwig Van.”

Before long, Alex ends up in prison where he undergoes the controversial Ludovico Technique, a kind of aversion therapy where he is fed images of horrendous violence along with a drug to induce nausea. The result is that he can literally no longer stomach the thought of aggression, and is pronounced cured.

But what of free will? This is the question posed by the prison chaplain and, ultimately and not so subtly, Burgess. Is a society devoid of the power to choose good over evil worth the cost of eliminating violently antisocial behaviour? And are those politicians behind his reformation motivated by good or by votes?

With a production that references the gang culture of, say, Brighton Rock and has Alex and his band of droogs prancing and posturing like Montagues or Capulets, and with reports of knife crime rife amongst today’s urban youth, it’s easy to infer that young men have ever enjoyed the thrill and endorphin rush of violence, and ever will. Ultimately, Alex simply grows out of his behaviour.

But Burgess’ satire takes things to an unpalatable extreme, which is possibly where this production goes too with the introduction of Jimmy Saville as a prison inmate who receives the kind of treatment many people wish he had in real life.

To exaggerate the satirical nature of the piece, Bagnall’s production has the police complete with snouts, as they display almost as much vicious venom as the teenage monsters they apprehend, and there is a surreal piece of puppetry to depict the minions of the Office of the Interior/Inferior which lends the play a nightmarish quality. Which quality is reinforced by the strange glow of ultraviolet that bathes the stage.

And it’s a craftily conceived stage at that. Bodies and bags of rubbish are disposed of down a slide into the bowels of the building – a visual metaphor for the slippery slope? Molly Lacey Davies and Jocelyn Meall’s open pergola-like structure with trapdoors and rising platforms allows the action to be performed on many levels yet contains it like the prison cell Alex briefly inhabits and, arguably, like the societal rules that confine us all.

But most of all it is the interplay of sublime audio and grisly visual that makes this performance. The rhythmic, poetic nature of the teenspeak, Nadsat, which Burgess coined to demonstrate the alien nature of youth, when combined with his own weirdly twisted music-hall numbers and the fabulously Beethoovian drama of an in-house percussionist, Peter Mitchell, are as much the stars of the show as George Caple’s brilliantly cold Alex, Phil Rayner’s chillingly clowny Dim and Keddy Sutton’s booze-addled God-bothering Minister.