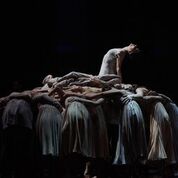 Music : Vincenzo Lamagna after the original score of Adolphe Adam

Mesmerising, moving and exquisite – that’s Akram Khan’s Giselle re-imagined for the English National Ballet, now at the Liverpool Empire.  One of the most romantic ballets in the oeuvre this retelling is visceral and heartrending.

It is also a spectacle, one that has the audience holding its breath for the whole performance. Visually it’s outstanding with muted colours, dark corners and drone-like music. The dancing is also superb and Khan’s choreography mind-blowing.

Khan has deviated from the traditional story of a young peasant girl who is duped by an aristocratic lover and taken into the land of the Wilis – spirits of maidens who die of a broken heart. It’s a world away from his Bangladeshi heritage and Kathak dance in which he was trained.

For the past year Khan has been working alongside dramaturg Ruth Little to bring this ballet into the modern age with a harsh new setting. It’s still about power, love and betrayal, reality and the supernatural, but deviates dramatically from the bucolic European Romanticism of the 1842 original by Jules Perrot and Jean Coralli. In fact it has won two awards already, the 2017 South Bank Sky Arts Award for Dance and the 2017 Manchester Theatre Awards Robert Robson Award for best dance.

In this new staging Giselle is a refugee, one of a community of migrant factory-garment workers disposed by the factory’s closure and living in a makeshift camp, separated from hope by a high wall. Albrect, a prince in the traditional ballet, is here a landlord and factory owner. Khan said he wanted this new ballet to be about caste, class and mass migration.

The ballet opens with the ensemble in drab clothing facing an imposing high grey wall.

The sound system issues heavy beats and the drone-like music ensues. One is caught up in a doom-like scenario. Eventually Giselle (Tamara Rojo, artistic director of the ENB) emerges from the grey-clad figures, and we meet prince Albrecht (James Streeter) and her migrant admirer Hilarion (Geoffrey Cirio), and we begin to see the love triangle surface.

The ensemble dancing is unique and dramatic with dancers whisking across the dim-lit stage with attitudes not associated with classical dance. You cannot take your eyes off them. And there are silences that are so dramatic you cannot even hear a sweetie paper rustle.

Rojo is a wisp of a thing and her Giselle is a pitiful embodiment of love and loss. Her dancing is wonderful and partnered with Cirio you can feel the yearning and heartache. Together they hold the audience in the palms of their hands as they twist and turn and present almost impossible moves.

At the end of the first act Giselle dances to her death when she learns that Albrecht’s betrothed has beckoned him back. The choreography is so spellbinding and emotive with the ensemble, acting as one in a wave-like form, you are drawn in and feel part of the on-stage action.

In the second Act Myrtha, Queen of the Wilis (Stina Quagebeur), brings Giselle’s spirit to life and wills her to live in the supernatural world, using a stick to such affect. Eventually the Wilis emerge en pointe, also with long sticks that are threatening and dangerous. It is only here in the second act that part of the original score by Vincenzo Lamagna is used. It is a brief relief from the durgy drama of the adapted music by Adolphe Adam.

But it is used to great effect. The Wilis gather and kill Hilarion (brilliantly danced by shape-shifter Jeffrey Cirio). As one they weave and entwine and we see the killing unfolding in mesmerising slow motion. When Giselle is left alone Albrecht appears and dances with Giselle. Their pas de deux is beautifully nuanced with almost impossible pairings and one can feel the love and loss. It reaches right into your soul.

Khan’s choreography between human and spirit is well imagined and we see Albrecht mystified as Giselle slips from his embrace. Quagebeur is entrancing with her interaction with Rojo and Streeter in their struggle over the killing of Albrecht. Being en pointe, as in the traditional ballet, gives this scene a magical presence.

Although without a programme it might be a tad difficult to realise this new story of Giselle, but what matters is the theme of the piece. It’s about love and betrayal, a universal trope. But this is secondary to the mesmeric set and costumes by Tim Yip (Crouching Tiger Hidden Dragon) with his ever imposing wall, and the wonderful dancing by the principals and the cast.

For the purists this Giselle is like no other. It’s not the comfy white ballet telling an old story they’re used to. Akram Khan has brought  to the dance world something new, unique and amazing. Something that I would love to go back to see again.