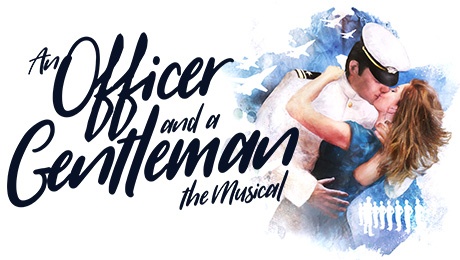 An Officer and a Gentleman

The flight path of true love never runs smoothly. Especially when you are a factory girl and the only way out of your drudgery is an air-ticket on the wings of a young man hoping to be a top US Navy pilot.

Before the starry-eyed officer cadets can go on to be pilots they first have to go through the hell of basic training where the only distraction are the girls. Some quickly doubt their abilities while others take on the rigours with renewed conviction.

Such tales of troubled love are a dime a dozen, but this is the extravaganza’s very simple main theme. It started life as a 1982 film starring Richard Gere and Debra Winger. It is one of several recent shows that have reversed the idea of stage to film and taken the film as a basis for a musical.

And the power of this venture is its homage to the music of that period. In fact, the music can often overwhelm and the balance between singers and the music is far from perfect.

Despite this it is undoubtedly the passion of the singers that captivates and enthrals the audience who have come for a good night out full of fairy-tale romance.

They recall several pop classics of which the most memorable were It’s a Man’s Man’s Man’s World, Girls Just Want to have Fun and Material Girl.

The other dynamic that plays a big part in the thrust of the narrative is the compelling insight into the gruelling training regime undertaken. This is superbly amplified by some excellent stage-projection of images. Indeed, slick stage work was a big plus in helping the actors keep up some hi-octane performances.

The principals squared up to their roles and paraded their talents: Emma Williams gives a genuine feel to Paula, the factory girl out for love rather than just having a good time and then waiting for the next intake of innocent would-be officers to arrive.

Her beau Zack, one of the top hopes of the current batch, is clearly tortured by his past and self-doubt. Self-doubt as, unlike his pals, he is not natural officer material. And he is reminded of this daily by the presence of his father, an ordinary sailor, stationed at the training centre. Jonny Fines portrays Zack’s dilemma with power and finesse.

Paula’s best friend Lynette (Jessica Daley) is the material girl but her wiles to win the unworldly Sid (Ian McIntosh) could just backfire.

We mustn’t overlook the pivotal role of the Drill Sergeant played with delicious enjoyment by Ray Shell. But is he quite as bad as he paints himself?

In among the romance is Casey Seegar, (Keisha Atwell) scorned as Ghetto girl, who is determined to be the first woman to fly a fast-jet for the US Navy. She has daily battles with her fitness and the Drill Instructor.

A happy landing for those with a romantic nature.