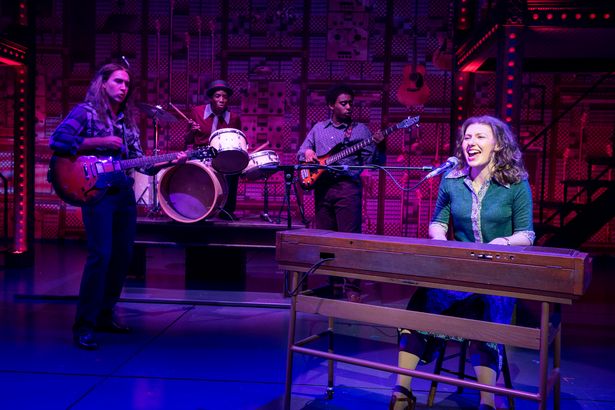 Beautiful: The Carole King Musical, which is at The Liverpool Empire Theatre until Saturday, is a game of two halves. The first half consists of song after song after song. All recognisable monster hits of the late fifties and sixties, with little bits of story joining them together in the best traditions of the Juke Box musical. By its end however, in all honesty, we know as much about King and her life as we did forty-five minutes earlier. The second half though, when the Carole King story is allowed to take centre stage, is where the whole thing takes one massive breath of theatrical air and evolves into a production befitting it’s title and subject matter.

There can be little denying the huge amount of gratitude the world of music owes to Carole King. The sheer volume of work she and her one-time husband Gerry Goffin composed, both musically and lyrically, is simply staggering. Two natural talents fated to be and work together, or so it seemed, until Goffin’s anxiety and depression destroyed their partnership.

Up until then, the stars feted their work. Neil Sedaka – King’s one time boyfriend – sang a song about her, The Drifters made being On Broadway and being Up On The Roof seem seductive and Little Eva did The Loco-Motion and caught the train to stardom, having been the couple’s baby sitter. The Shirelles, meanwhile, asked whether Will You Love Me Tomorrrow. Here, by the way, the hairs lifted right off the nape of the neck at this performance! Yes. it really was that good!

These and many more are all superbly sung, with a magnificent Bronte Barbe turning in a staggeringly good performance as King and Kane Oliver Parry mirroring his ‘wife’s’ integrity and wit with heaps of seriousness that’s quite compelling at times. It’s such a shame we don’t get to know more about their working and private relationship before things go south. When the iron was hot, so to speak.

It’s not all tears before bedtime. In fact, there are more than a few laugh out loud moments and most of which are supplied by Amy Ellen Richardson who is just superb as fellow lyricist Cynthia Weil and Matthew Gonsalves as her partner, Barry Mann. Yes. The two who wrote several hits of their own, but arguably most notably You’ve Lost That Loving Feeling for The Righteous Brothers and We’ve Gotta Get Outa This Place for The Animals. The chemistry of these two actors ignite what could otherwise be a tepid beginning and illuminate an at times deliciously dark second half.

As impresario Donnie Krishner, Adam Holden certainly has a neat cut to his gib, whereas Carol Royle is almost unrecognisable playing King’s mother, Genie Klein. All sad lamenting, “I told you so” hutzpah, hers is a brief but nevertheless memorable contribution.

The lights are bright and glitzy, the sets huge and impressive, the costumes are glamorous and chic. Yet there is absolutely no doubt whatsoever that the biggest attractions of this show are the music and the performance of its’ star, Bronte Barbe, who absolutely knocks It’s Too Late, You’ve Got A Friend, (You Make Me Feel) Like A Natural Woman and the show’s title track right out of the park, whilst also managing to retain her character’s nasal, Brooklyn nuances throughout.

A show of highs and lows, yes. This notwithstanding, however, Beautiful: The Carole King Musical is still a show that’ll have you humming several of its showstoppers well after lights out.

Beautiful: The Carole King Musical is at The Liverpool Empire until May 5.