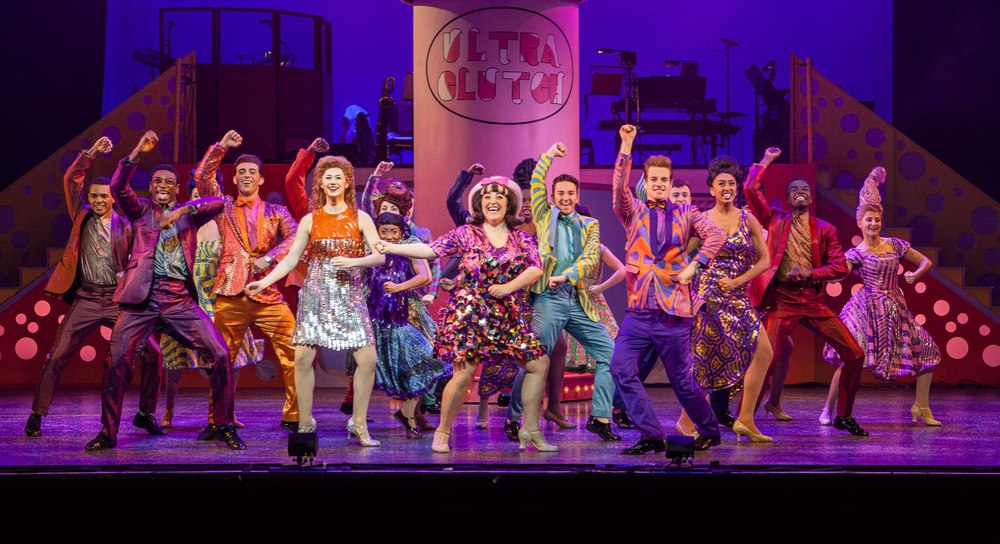 Big Hair, Big Women and a very BIG Standing Ovation. Hairspray  has arrived at The Liverpool Empire and boy, does it deliver. With high energy from start to finish, even the ‘rats on the street’ would struggle to stay in their seat.

Set in 1962 Baltimore, Paul Kerryson brings this production famous worldwide musical phenomenon to Liverpool starring comedic legends Matt Rixon (Edna), Norman Pace (Wilbur) and Rebecca Mendoza making her professional debut as Tracy Turnblad; an ambitious teen determined to make it in the world of television, despite her size and promotion of integration.

The simplistic open stage setting is lit with displays of luminous colours from the get go and never slows down for the entire show. The production relies heavily on an ever changing picture screen backdrops to distinguish different settings and two moving mini stages from each side provide various scenes.

As the story progresses, the live band is exposed at the top of the stage acting as Corny Collins’s (Jon Tsouras) TV ensemble. Being able to watch the band members impressively perform and interact with characters as well as play their instruments, is a refreshing and fun concept.

The range of fun-loving, but not free-wheeling, characters only provides the show more of a flourish, with Tracy’s love interest Link Larkin (Edward Chitticks) resembling a Disneyesque ‘Flynn Ryder’ style of character. Special mention should also be made of Layton Williams as Seaweed who radiates swag, rhythm and musicality, while Annalise Liard-Bailey as Penny Pingleton offer faultless comedy timing.  Not forgetting Amana Jones who  stands in faultlessly as the understudy in the role of Little Inez.

Without a doubt, it is the older cast members who completely steal the show. Gina Murray as Velma Von Tussle in managing continuous upside down lifts whilst keeping complete vocal precision and Brenda Edwards as Motormouth Maybelle whose singing solo’s blew the audience away manage to create several mini standing ovations mid-show such is their energy.

However the scene that completely takes the cake and leaves the whole audience in fits of laughter, is Rixon and Pace’s duet of ‘(You’re) Timeless to Me’. The tongue in cheek ad-lib from these two, chemistry they engender combined with them laughing at their own jokes, produces a great scene which is not taken seriously by neither the actors nor the audience, and is as memorable as it is tough to better.

The show ends with the whole cast coming together celebrating integration with, a high energy, fun song and dance routine that is simply flawless and high octane. This brings everything together, leaving Hairspray front and centre the Number 1 feel good show with You Can’t Stop the Beat ringing joyously in the audience ears long into the night. That the entire theatre is on its feet as it ends, speaks volumes for just how fabulous this show is.

Hairspray is at the Liverpool Empire until April 21. Click HERE