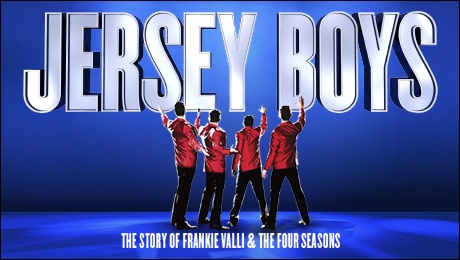 If you’re out to start your new year with a theatrical bang, then don’t hesitate in booking tickets for Jersey Boys which is currently running at The Liverpool Empire Theatre. Packed with not only the great music of Frankie Valli and The Four Seasons, there is the captivating- at times harrowing – saga of what made them the phenomenal group they were … Mafia problems et al!

Packed to the hilt with hit after hit after hit, Jersey Boys – surprisingly – is a show that’s so much more than the songs alone. A story of the struggle to get up and get out of the mean streets of Jersey, no matter how, and to let individual talents shine is the true star of this rocking Juke Box musical.

Yes. That’s right. A Juke Box Musical with an actual story!! Who’d have thought it?!

The set is a stripped back affair, with props and screens telling us where we’re at throughout. A nice touch too is that each chapter of the band’s career is entitled Spring, Summer, Fall and Winter … although, with the exception of Nick Massi’s passing, a role played here with superb laconic, comic timing by understudy Karl James Wilson, and that of Valli’s daughter Francine via a drug overdose – a wintery feel never really sets in at all.

So to the cast which, despite six understudies stepping into the breach due to illness, all perform with immaculate gusto.

With a voice range as high, strong and soaring as the Rockies themselves, Michael Watson absolutely nails the role of the street-kid-made-good Valli. With all the nuances tacked firmly into place, his is a performance that delights at every turn. His Stay will linger just a little bit longer for sure, as will Big Girls Don’t Cry, Bye Bye Baby and Walk Like A Man. Yet when Watson breaks into Can’t Take My Eyes Off You – complete with the onstage brass section chipping in – life imitates art and has the audience up and out of their seat from bar one, chord one.

Flu may have hit the cast, but the understudy performance of James Winter as the band’s main hit maker- and the show’s composer – Bob Gaudio is mesmerising in its assurity. Winter has a poise and calmness that soothes the often manic going’s on and so provides a pressure valve that lets the story seep out.

Much of the chaos comes from Tommy DeVito; part time hood, all time gambler. The founder member who landed the band in hock to the mafia and taxman – one and the same, some might say – to the tune of a million dollars.

Here played by Simon Bailey, the man’s charisma is given space and so shines like a beacon on a misty morning. DeVito’s duplicitousness knowing no bounds, Bailey’s interpretation never comes across as being that of a pantomime baddie; just a baddie with a guitar and a problem.

Joel Elferink’s mega-producer Bob Crewe – all camp as Christmas and as cutting as a cheese slice – is a joy to watch in action, whereas Tara Young’s transformation from “Cougarish” Mary to “Feral Cat” Mary – Valli’s first wife – is a lesson in being careful of what you wish for.

With all the glitz and glamour of a true Hollywood Rags to Riches soap, and all the foreboding of things on the outside not being quite as enviable as they might appear, Jersey Boys is a 24 Carat Gold hit of a show that will, like its music, remain forever young.

Jersey Boys runs at The Liverpool Empire Theatre until January 20.