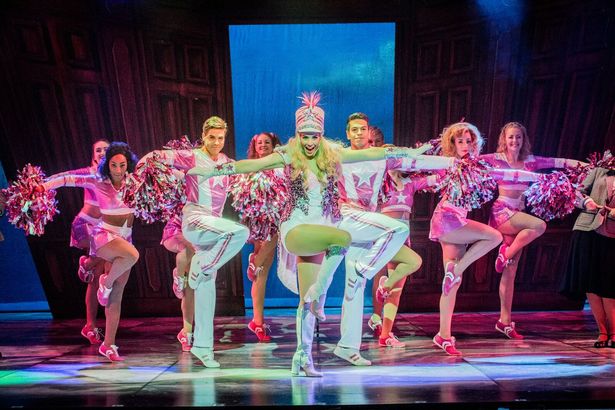 Get ready to paint the town PINK in this musical adaptation of Legally Blonde. Where fun-loving, ditzy Elle Warner fights her way into Harvard Law School all for love.. and remember if all else fails you just have to, bend, and snap.

Starring Lucie Jones fully embodying the role of Elle Woods, a popular and high-spirited girl from Malibu who gets her heart broken when her boyfriend Warner Huntington III is looking for a ‘serious’ girl. With this, Elle and her doggie, Bruiser, adorably played by the Bruisey Williams-Dodd, go on a journey to Harvard Law School to win back her love.

Soap fanatics will love this show as it stars Rita Simons (EastEnders) as Paulette and Bill Ward (Coronation Street) as Professor Callahan with both of them proving a triple threat in acting, singing and dancing. Ward takes the dominance of the room with the audience feeling like a part of his class and Simons portraying a hilariously flamboyant Paulette and boy, can she sing!

Jones lights up the whole room as the lead Elle with her witty one-liners making it impossible to take eyes off her and her comedic timing is fabulous, funny and full of flair. With special mentions to her two love interests Liam Doyle as Warner Huntington III and David Barrett as Emmett Forrest. With both showcasing fabulous vocal ranges, Doyle re-creating a loveable villain character and Barrett as the endearing underdog.

The back-up dancers, singers and swing set are absolutely amazing and manage to create their own presence within the performance, staying in character the whole time with their flawless Americanisms and coordinated dances. This accompanied with the funky, retro set changes which display the transformation of scenery clear and perfectly.

The scene which steals the show is a synchronised LED jump rope dance scene Helen Petrovna as Brooke Wyndham, with the whole audience in complete awe at the talent of Petrovna’s singing, dancing and perfectly in sync jump rope routine. It is not something to miss.

Ending the night with a high energy, colourful, dance mega mix, it had the whole audience on their feet dancing and clapping. Legally Blonde is a hilarious and fun night out for everyone and leaves the audience feeling inspired and with their cheeks hurting from laughing.

Legally Blonde The Musical is at the Liverpool Empire until June 9.