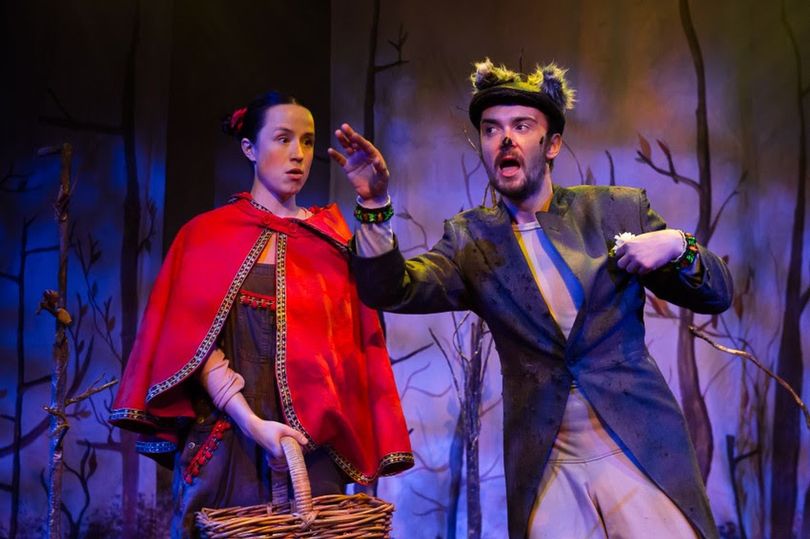 My, what a delightful ninety minutes of storytelling Little Red & The Big, Bad Wolf is. All the better to entertain us at The Unity Theatre with and that’s for sure, ahead of Action Transport Theatre taking it out on the road across the country.

This is the second time the show has appeared at The Unity. It was last year’s Christmas treat and, as such, received glittering reviews all round. It’s easy to see why, with it’s beautifully designed set – the floor a mass of red needles that, when swept, reveal the path through the woods and the confines of Granny’s house – a fine collection of songs, some ribaldry to please the grown ups and more than a few scary bits to delight the kids.

Yet what truly shines is the versatility, passion and downright skill of the cast. As Little Red, the girl who breaks her promise and wanders from the path through the woods, Luca Rutherford has such charming naivety it is as though her own self has been consumed by her character. Red’s mum, played by Liz Jadev is all cool authority and common sense and, like all good mums, is proven right.

In the role of the banjo-wielding Wolfie, Harvey Robinson comes across as the smoothest, coolest, smarmiest Wolf this side of Wall Street, whereas Granny played by Simone Lewis is simply hilarious.

Ripped through from first to last with charming, heart-warming assurity and with BSL Interpretation exquisitely delivered by Kate Labno, Little Red & The Big, Bad Wolf has everything you and your child could possibly wish for, including songs that roll around in your head during the wee small hours. Never mind. Go anyway. You won’t be disappointed.

On tour throughout December 2017 and January & February 2018.
See below for all the tour dates, including performances with integrated BSL-signing.