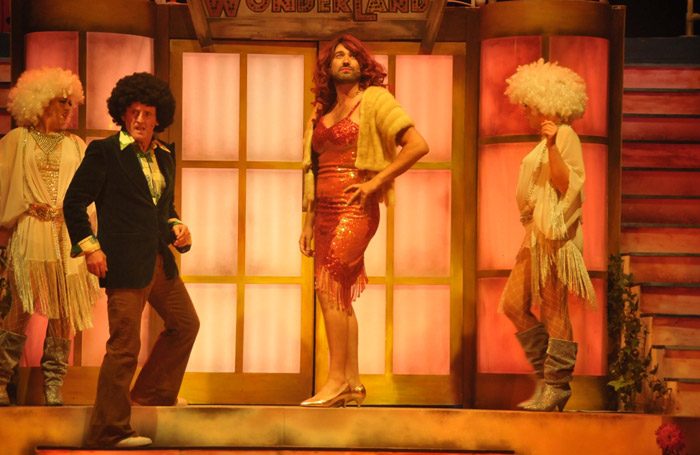 Mam I’m ‘Ere returns to the Royal Court for another run, this time out with a bigger and better set, even more gags and a cast that’s simply superb. The show’s a crowd-pleasing night of comedy, fun 70’s hits and a taste of the Liverpool humour. A show for all ages, whether it be a Ladies Night or a Family Affair.

The Disco Diva’s, Mia Molloy and Rachael Wood kick off the evening energetically by pumping up the crowd, offering a warm welcome into Boogie Wonderland. Introducing Sally (Hayley Sheen) in search of her long-lost mum the day before her wedding day, unbeknownst to her dad Dave (Andrew Schofield).

The live band is situated at the top of Mark Walter’s impressive set design, a multi-tier cartoon-esque caravan site. Mounted with an array of hand painted caravans (helped by Michael Fletcher), greenery and colourful intricacies, authentically reminiscent of a cloudy day in Wales with the sound of seagulls cawing around the audience.

Non-stop laughs from crowd with the cast chime in with ad-libs at the perfect moments, working with the audience to create an intimate and personal atmosphere. The actors manage to keep up the energy within their scenes, whilst communicating and encouraging audience participation.

Special mention to Lindzi Germain, who offers a hilarious performance as Julie, the loud and abrasive potential mother, but who is more reminiscent of a crazy, fun aunt. Andrew Schofield as lost dad Dave is hilarious from the get-go with his dad-like dance moves and jokes, he heart-warmingly embraces this character and makes it his own.

The scene that leaves the crowd in stitches is the 70’s flashback where Dave returns to his youth to recall the women in his life. Jake Abraham and writer/actor/director Stephen Fletcher dragging it up and completely stealing the scene, while also looking surprisingly attractive as women!!

Abraham amps up the comedy again as his character transforms into an American ghetto-like priest during the wedding scene. Slightly reminiscent of the recent Royal Wedding American priest.

The ending may be exaggerated but it all adds towards the hilarity and feel good intention that the show is going for. Ending with a standing ovation from the audience, Stephen Fletchers Mam! I’m ‘Ere is bigger and better than ever this time around.

Mam! I’m Ere is at the Royal Court until August 11.